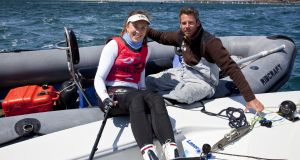 In the aftermath of last weekend’s combined ISA Pathway & Youth National Championships on Belfast Lough, sailing classes are spoiled for choice in a range of stand-out performances from the 210-competitor turn-out.

Ballyholme Yacht Club and its 70-strong army of volunteers delivered a smooth event with plenty of space afloat for three course areas and mostly very-light to medium winds.

Crowning the line-up of under-19 year olds, World Silver medallist Ewan McMahon from Howth YC had the best show of consistency as he won the Laser Radial class.

“He’s very much the ice-man – he wasn’t winning many races but he’s always up at the front,” said Rory Fitzpatrick, the ISA youth & development manager.

For Fitzpatrick however, the big stand-out in the Laser Radials was Rush Sailing Club’s Conor Quinn and Aaron Rogers coming second and third.

“There’s a great coach in the club – Alan Ruigrok – who is a top Laser racer who didn’t go on to the Olympic team but is a very good coach and it’s showing now.”

The result is now typical of the youth championships where smaller and more regional clubs are holding their own or winning against the older, establishment yacht clubs. But how long before one of the bigger clubs snaps up Quinn and Rogers and adopts them as their own?

“The Rush guys are pretty stalwart and I think they’re pretty loyal to their coach – they call themselves “Alan’s Army” – so it goes to show what a club coach can do,” said Fitzpatrick.

“It gives a focal point for training, makes a group, the group makes a social atmosphere and everything around it.”

Pre-event, Fitzpatrick was also expecting girls to rise up the ranks especially in the Topper class and while boys won the top three places, girls accounted for half the top ten places.

Amongst many other notable performances, Justin Lucas from the Royal Cork YC won the Optimist class trials by a massive 44-point lead from nearest rivals Conor Gorman and Harry Twomey.

But while the championships are all about racing and even the evening programme was all about passing on expertise and experience from a variety of experts, notably Olympic Silver medallist Annalise Murphy who packed out the marquee to capacity, a background debate rumbles on over which of the multiplicity of dinghy classes should be used for youth training on the pathway to elite and Olympic levels.

In the ongoing debate between selecting the 420 over 29er class, the former delivered 17 entries for the nationals last week.

“The 420 fleet was very strong – by design of the class. Seventeen boats was a genuine fleet race – it was really good to watch,” added Fitzpatrick. “There might be debate about classes but the priority has to be to have at least one strong double-handed class to get fleet experience: that overrides any debate on the equipment.”

“Some sailors prefer the 29er and there is a system there for qualifying for that class at the Youth Worlds – if they’re putting the effort in then we will try and help them on an individual boat basis. We don’t block them but we do aim our squad resources at the 420.”