Meanwhile, Sebastian Coe has also been elected as a new member of the IOC 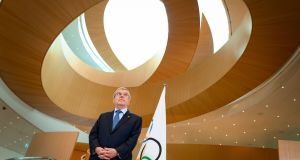 Thomas Bach said that he will stand in 2021 for a second term as president of the International Olympic Committee (IOC). The 66-year-old German was elected for an eight-year term as Olympic chief in September 2013. Photo: Fabrice Coffrini/AFP via Getty Images

International Olympic Committee (IOC) President Thomas Bach said on Friday he was ready to run for a second term at next year’s election while Sebastian Coe was been elected as a new member of the committee.

Coe had previously been barred from joining because of his role as chairman of CSM Sport & Entertainment, a global branding agency which works with a number of sports stars and firms with links to the Olympics.

Bach, the 66-year-old German, a former Olympic fencer who won a gold medal for West Germany in the team foil event at the 1976 Games, was first elected in 2013 for an eight-year term and is eligible for one further term of four years after that.

“If you the IOC members want, I am ready to run for a second term as IOC president and to continue to serve you and this Olympic movement, which we all love so much, for another four years,” he told an IOC session.

During the session, which due to the Covid-19 pandemic was held by video conference for the first time, Bach received declarations of support from several dozen IOC members, causing a delay of around 45 minutes.

If re-elected, Bach will have to oversee the IOC’s recovery after it decided, along with the Japanese government, to postpone this year’s Tokyo Olympics for one year due to the pandemic.

In his opening speech, Bach also warned against a “growing misuse of sport for political purposes”, saying that boycotts were “once again a real danger”.

“This comes exactly 40 years after the completely unsuccessful boycott of the 1980 Olympics (in Moscow), it appears that today some just do not want to learn anything from history,” he said.

Bach added that “such sporting boycotts do not have any political effect whatsoever” and pointed out that the Soviet army, whose invasion of Afghanistan sparked the 1980 boycott, remained in the Central Asian country for another nine years.

“The only political effect the boycott of 1980 had, was to trigger the revenge boycott of the following Olympic Games Los Angeles 1984,” he said.

While there has been no serious discussion of a potential future Olympic boycott, the Beijing Winter Olympics in 2022 could be complicated by a number of political showdowns.

These include an increasingly unstable and volatile situation in Hong Kong and an American election that could see U.S./China relations as one of the main issues.