Angling Notes: Farewell to Big Jack – one of our own 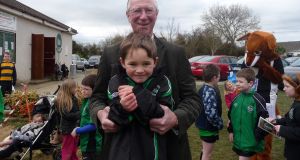 Jack Charlton with Derek Evans’s grandson Jamie, at Swords Celtic FC grounds, Dublin, in 2010. Jack had rushed from launching the Irish Expo angling show to help out with launch of club’s new facilities.

I first met Jack Charlton in the late 1980s in a car showrooms on the Long Mile Road in Dublin where he was guest of honour at the launch of the late Peter O’Reilly’s first book on game fishing in Ireland.

As a great friend of Peter’s, he travelled over from the UK to launch all four of the latter’s s books. Indeed, on one occasion he took time out from his busy schedule with the Irish soccer team to support his close friend.

As I mentioned in last week’s column, I got to know Jack quite well while salmon fishing at venues around the country. But, of course, residing within five minutes’ walk from the Ridge Pool on the Moy during his summer vacation, enabled him to toddle down to the Ridge office for a chat and, if a vacancy occurred, he would grab it.

One memorable day stands out. The Irish Expo angling show was scheduled to be held in the National Show Centre in Swords, Co Dublin. I suggested to the show organiser, Hugh Bonner from Mara Media, he should ask Jack to launch the event. Jack immediately accepted the invitation.

As a resident of Swords, I was involved in soccer with my local Swords Celtic FC and it transpired that the club was launching its resurfaced pitch and revamped club facilities on the same day as the show.

I had a quiet word with Hugh to see if I could borrow Jack for an hour or two. “No problem Derek. As soon as the launch is over, you can take him,” he said. Arriving by car at the club grounds we were met by at least 300 youngsters and parents all looking for Jack’s autograph. It was brilliant.

The match itself was between a League of Ireland selection and Swords Celtic and Jack was given the honour of cutting the tape and saying a few words.

“It’s hard to believe that 15 minutes ago I was at a fishing show and now I’m watching a match,” he said.

We arrived back to the angling show about four hours later. (I remain truly grateful to Hugh for this gesture.)

Then there was the unforgettable fishing weekend at Pontoon Bridge Hotel in Co Mayo. I could go on . . .

My sincere condolences are extended to his wife Pat and extended family on the passing of this wonderful gentleman.

The trout stay below

Brenda Montgomery’s report of events on Sheelin over the past 10 days continues to show the lake underperforming with just 27 trout recorded. Oliver McCormack’s superb six-pounder took the honours on an International Dabbler in the Orangefield area.

With trout having an inclination to stay subsurface, the top dropper is now the most important fly, so aim to have a bushy fly in this position that will create plenty of waves to attract our spotty friends, Montgomery said.

Good flies to try at the moment are the Murrough, small dark olive patterns, dry sedge (12-14), Booby on the point, Green Peter, a combination of a small Golden Olive on the pt., Green Peter in the middle and a Claret Bumble on the top.

For those anglers after the daphnia feeders, head for the open water using a bright orange fly. When fishing small dry sedges along sheltered areas it is best to use a floating line with a 4-6lb leader.

The Icelandic salmon season has started strongly and groups of Farlows Travel clients are set to touch down in the country in August. There is still some availability on Icelandic rivers, so do get in touch if you’re itching for a cast this summer.