‘I’m okay with that, as long as everyone is being treated equally. That’s all I care about’ 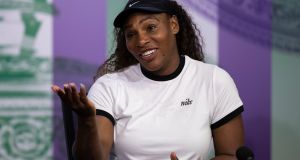 Serena Williams during a press conference ahead of the 2018 Wimbledon Championships. Photograph: Jed Leicester/AELTC/PA Wire

Serena Williams feels she is unfairly singled out by anti-doping chiefs after figures released this week showed she is drug tested far more than any other American player.

Williams complained shortly before last month’s French Open that testers had visited her twice in one week, despite her lowly ranking of 454 at the time, and brought the matter up with the US Anti-Doping Agency (Usada).

And this week an article on deadspin.com revealed the 23-time Grand Slam champion has been drug tested five times this year, whereas fellow American players Sloane Stephens and Madison Keys had been tested just once.

Williams said she had not realised she was tested more often than her compatriots until the story came out.

“When I saw it, I actually learned from it. I thought, ‘wow’. I literally didn’t know that,” she said. “I do know I’m always tested. I’m always getting tested, all the time. No matter where I’m ranked.

“I sat on player council for 12 plus years. Normally it goes on ranking. I get it even if I’m number one. How is it I’m getting tested five times? It’s only June, I’ve been tested five times.

“I’m okay with that, as long as everyone is being treated equally. That’s all I care about.

“I feel like equality, that’s all I’ve been preaching, it’s all about equality. If that’s testing everyone five times, let’s do it. Let’s be a part of it.

“It’s just about being equal and not centring one person out. Just due to the numbers, it looks like I’m being pushed out. Just test everyone equally.”

Having returned to Grand Slam action at Roland Garros following time off to give birth to her daughter, Williams has climbed back to 181 in the world.

She was not seeded in Paris but Wimbledon chiefs have taken into account the seven-time winner’s previous achievements and seeded her at 25.

The 36-year-old is second favourite for the title, but she insisted her seeding is not too low.

“I think it would be ungrateful to say that. So not at all, in fact I was pleasantly surprised,” she said.

“It was a bit in the back of my mind that I would have a chance but I didn’t put too much on it. I think it’s very noble and cool.”

The decision has divided opinion in the sport but defending champion Garbine Muguruza said: “It’s a tournament decision.

“It is what it is. She’s seeded. The tournament can do that if it wants to. Of course, she’s a multiple champion here, so I think it’s understandable.”