Craig Fulton ends tenure on a high with victory over France

Men’s senior international Test match: Shane O’Donoghue lands four goals in Saturday’s 6-1 win and he added another on Sunday in a 3-0 success 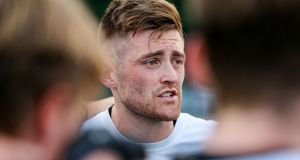 Craig Fulton received a fine send-off from the Irish senior men as his final weekend as head coach ended with two big wins over France.

Shane O’Donoghue cracked home four times on Saturday in a 6-1 win and he added another on Sunday in a 3-0 success alongside goals from Stu Loughrey and Alan Sothern.

It brings the Glenanne man up to 87 in total, six shy of record-holder John Jermyn who formally hung up his international stick on Thursday night.

Sunday’s scoreline was a deceptively one-sided one with David Harte made to pull out every extent of his reflexes to keep Ireland level.

And they finished with a flourish, Loughrey’s slow-roller putting them in front with 17 minutes to go from Sothern’s cross. O’Donoghue whipped in a devastating low corner drag-flick before he set up Sothern with three minutes to go.

For Fulton, it was a lovely way to end his tenure as his contract with Belgian hockey starts on Monday morning.

“I am an emotional guy and that’s what drives me,” he said of the final day in office. The day started with a team video session that looked back on a three-year term that included in a first Olympic spot in over a century, a maiden European bronze and a ticket to November’s World Cup.

“I am very proud of what we have been able to accomplish together. It has been a difficult weekend but a very proud one.”

What happens next remains up in the air with no replacement for Fulton in place for the next few months.

The coach, though, says that there is enough know-how in the camp between the experienced players and assistant coaches Kai de Jager and John Bessell to continue things on.

“In house, there is enough calibre to carry it forward. It’s not my decision to make but the assistant coaches are running it and the players are running themselves.

“They just need to confirm the programme and make sure everyone is available due to work. Work conflicts are the biggest challenge for this group now. You don’t want anyone on unpaid leave who can’t commit.”