Ian O'Riordan: The unbearable lightness of being a long distance runner

Sarah Keane, in her role as OFI president, appears to be putting athletes more centre stage 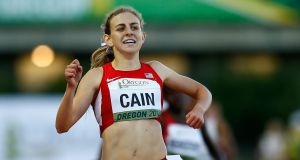 US distance runner Mary Cain in a harrowing video feature in the New York Times spoke about the pressure put on her to lose weight after moving to the now defunct Nike Oregon Project in 2013 to train under Alberto Salazar. Photograph: Inpho

We were somewhere between the holding camp at Fukuroi and the rowing venue down at Tokyo Bay when Sarah Keane suddenly changed direction. If there is one thing to separate the Olympic Federation of Ireland from the old guard it might be her intention to make the health and wellbeing of athletes the priority in Tokyo next summer. At least as much as anything else.

Because for all the talk about venues and improved ticket distribution and transparency around who gets the free flights to Tokyo, it was Keane’s suggestion – unprompted – that we all need to show a greater duty of care for the athlete which perhaps resonated most after the OFI’s media briefing earlier this week.

By that she didn’t just mean keeping them shaded from the Tokyo sun. “I also think that the system is in a better place now,” she said. “You want an athlete, or anyone involved in the Olympics, to want to be an Olympian, to enjoy the experience, to think it’s one of the best things that’s happened.

“But you also don’t want them to be defined by that. Ourselves, the Federations, we all have to look at that, to ensure we do things for athletes and support them in other ways, so their life isn’t just ‘I’m a swimmer’, that’s who I am. You’re more than that, more than a golfer, or a triathlete.”

It’s not that these defining issues were ignored by the old Olympic Council of Ireland (OCI): far from it. It’s just that Keane, in her role as OFI president, appears to be putting them more centre stage. And for good reason.

Chasing any Olympic dream is often a perilous pursuit, and fulfilled or not can leave plenty of scars, physical, mental or worse. Just ask Kenneth Egan, or Martin Fagan. No athlete support system can ever be faultless, and there’s no guarantee something won’t break down. Even when it might seem the interest of the athlete is at heart.

Another stark reminder of that came with the tale of rising American distance runner Mary Cain, who in a properly harrowing video feature in Thursday’s New York Times spoke about the pressure put on her to lose weight after moving to the now defunct Nike Oregon Project in 2013 to train under Alberto Salazar.

Just when it seemed Salazar’s reputation for showing utter disregard for the health and wellbeing of his athletes couldn’t sink any lower, Cain says he was constantly trying to get her to lose weight – by any means possible – and no one on the all-male Nike staff appeared to care.

“I joined Nike because I wanted to be the best female athlete ever,” she said. “Instead, I was emotionally and physically abused by a system designed by Alberto and endorsed by Nike. When I first arrived, an all-male Nike staff became convinced that in order for me to get better, I had to become thinner and thinner and thinner.”

So began Cain’s unravelling, from record-breaking 17 year-old and straight-A student to being suicidal: her period stopped for three years and she broke five bones owing to Salazar’s near starvation diet. What ultimately broke her was trying to make it to the 2016 Olympics in Rio.

“In 2015, I ran this race and I didn’t run super well. And afterwards there was a thunderstorm going on. Half the track was under one tent and Alberto yelled at me in front of everybody else at the meet. He told me that I had clearly gained five pounds before the race. It was also that night that I told Alberto and our sports psych that I was cutting myself and they pretty much told me that they just wanted to go to bed.

“And I think for me that was my kick in the head where I was like, ‘this system is sick’. . . I wasn’t even trying to make the Olympics anymore . . . I was just trying to survive. So I made the painful choice and I quit the team.”

How Salazar or anyone else at Nike thought all this was in Cain’s best interest is disturbing. “He created an arbitrary number of 114lbs and he would usually weigh me in front of my teammates and publicly shame me if I wasn’t hitting weight. He wanted to give me birth control pills and diuretics to lose weight.”

Cain herself admitted that “it would be naive to not acknowledge the fact that weight is important in sports”: the problem is when “young women are forced to push themselves beyond what they are capable of at their given age”, made all the worse when a company as all-powerful as Nike appears to support it.

There has always been a certain amount of unbearable lightness in being a distance runner, more so the longer the distance, and for men every bit as much as women. There is no room for any excess weight and that’s not always easily maintained. It’s the difference between looking fit and racing fit and there’s often a fine line between the two, only for women it does a carry a little more risk, for all the reasons outlined in Cain’s disturbing tale.

It’s a risk even with proper support, and without the pressure of any coach, as outlined earlier this year by Irish distance runner Katie Kirk earlier this year, who found herself struggling with an eating disorder for five years, before making a successful return to the track this summer. The only pressure Kirk felt came from within – or else from social media.

Things aren’t helped when you also read about Richard Freeman’s medical tribunal in Manchester this week, and the means he resorted to at British Cycling and Team Sky in order to maintain the skeletal frames on their riders.

Truth is in some sports and especially long distance running lightness can and will always matter. The lesson in Cain’s tale is that perhaps we all need to show a greater duty of care to ensure it doesn’t become any more unbearable than it needs to be.