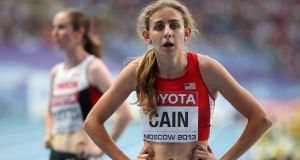 Mary Cain has revealed how she was ‘physically and emtionally abused’ by Alberto Salazar’s system. Photograph: Christian Petersen/Getty

A former Nike Oregon Project athlete has revealed how her period stopped for three years and she broke five bones owing to osteoporosis after being pressured to lose weight by the disgraced coach Alberto Salazar.

Mary Cain, who qualified for the 2013 world championships as a 17-year-old and was considered a once-in-a-generation star, also said she suffered from suicidal thoughts and had self-harmed.

Cain, 23, told the New York Times: “I joined Nike because I wanted to be the best female athlete ever. Instead I was emotionally and physically abused by a system designed by Alberto and endorsed by Nike.”

Cain said: “Alberto was constantly trying to get me to lose weight. He created an arbitrary number of 114lbs and he would usually weigh me in front of my teammates and publicly shame me if I wasn’t hitting weight. He wanted to give me birth control pills and diuretics to lose weight.

“I felt so scared and alone and I felt so trapped and I started to have suicidal thoughts. I started to cut myself. Some people saw me cutting myself. And nobody really did anything or said anything.”

When she told her parents they immediately bought her a plane ride home. “I wasn’t even trying to make the Olympics any more, I was trying to survive,” she said.

In an email to the New York Times, Salazar, who has said he will appeal after being banned for four years last month for doping offences, denied many of Cain’s claims and said he had supported her health and welfare.

Nike did not respond to a request for comment. The Guardian has also contacted Salazar for his response.

Cain also called for more women to be involved in track and field. “I got caught in a system designed by and for men, which destroys the bodies of young girls. We have to protect them.”

Salazar’s former assistant Steve Magness, who became a whistleblower, said he had witnessed the same behaviour at the Oregon Project. “At one point I was told I needed to make a female athlete lose weight,” he said. “When I showed data on her body fat being low already, I was told: ‘I don’t care what the science says I know what I see with my eyes. Her butt is too big.’ There was no adult in the room, looking after health and wellbeing. When the culture pushes to the extreme, this is what you get.”

The IAAF’s new reforms to the Diamond League, which include cutting or limiting the 200m, 3,000m steeplechase, discus and triple jump in next year’s programme, have been widely condemned by athletes.

Among those critical of the proposals were the British sprinter Adam Gemili, who tagged the Diamond League Twitter account in a tweet featuring a gif of actor Tom Hanks mouthing “really?”, and the former 3,000m steeplechase world champion Emma Coburn, who called them “insane”. - Guardian