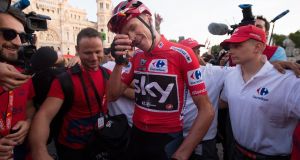 Former Tour de France and Giro d’Italia winner Stephen Roche believes it would be “humanly impossible” for Chris Froome to win all three grand tour races in one year.

Froome completed the Tour and La Vuelta double by winning the latter in Madrid on Sunday but Roche, who won both the Tour and Giro in 1987, does not think any rider could win all three in the same 12 months because of the importance placed on the Tour.

Six men have claimed all three grand tour crowns during their careers — Jacques Anquetil, Alberto Contador, Felice Gimondi, Bernard Hinault, Eddy Merckx and Vincenzo Nibali — but nobody has managed to win them all in the same year.

“To go out and win the Giro is very hard because of the (weather) conditions back in May, going to the Tour de France on the back of winning the Giro is always very complicated and I’m sure after winning a Giro and the Tour and going on to the Vuelta I think it’s humanly impossible (to win all three).”

Roche said he thought the Giro and Tour double was easier than adding the Vuelta to a Tour victory in the same year because of the status of the latter.

He said: “I did the Giro before going to the Tour which is, in one sense, a little easier because, especially in today’s cycling world, the Vuelta comes the last of the three tours and generally what happens now is everyone prepares 110 per cent for the Tour and they dig really deep to win the Tour de France.

“Many riders who rode the Tour de France and the Vuelta this year under-performed this year (at the Vuelta).”

Roche paid tribute to Team Sky rider Froome who was able to refocus on winning the Vuelta after his fourth Tour victory, joining Frenchmen Anquetil (1963) and Hinault (1978) in doubling up in the same year.

The Irishman said: “Chris was very well prepared for the Tour and the Vuelta this year. It’s a very difficult feat, that’s why he’s only the third guy in the history of cycling to have done the double of Tour de France and Vuelta.

“You always need luck but nevertheless when you have 195 guys out there who want to beat you, you always need a lot of stamina and a lot of hard work, dedication and a good team and excellent form.”

Froome, who headed home Italian Nibali and Russian Ilnur Zakarin in La Vuelta, is now focused on the team time trial at the Road Race World Championships in Norway later this month.

After his Vuelta win Froome told Sky Sports News: “I’ve got the World Championships coming up in Norway. I will line up in the team time trial with the rest of the lads and, after that, I think I’ll take a bit of a break.

“The Tour de France takes so much out of you and winning that then getting focused for another three-week grand tour is such a big challenge, so to do that (win La Vuelta) is phenomenal.”

Team Sky principal Dave Brailsford told BBC News: “Every now and again, you see an athlete, a world-class athlete right at the top of their game who just gets it all right.

“They get all the little things right, they have got the right mentality, brilliant leadership skills, they’re mature, they’re confident and they just kind of win, they know how to win and that’s what we have got in Chris Froome.”