Ring warriors framed in the tough environs of Guadalajara and Karagandy 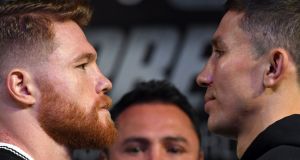 Canelo Alvarez and WBC, WBA and IBF middleweight champion Gennady Golovkin face off during a news conference at MGM Grand Hotel & Casino in Las Vegas on Wednesday ahead of their fight on Saturday. Photograph: Ethan Miller/Getty Images

On the inside of Saul Alvarez’s left biceps is tattooed a faded message that he embraced a long time ago: “No boxing, no life.” He smiles as he explains: “It’s exactly that: no boxing, no life. Boxing has given me a life. It has made me the man I am today. I owe a lot to boxing and I love it.”

And without it? “Really, I haven’t given that a thought. Maybe another sport.” That was never likely. Alvarez, famously called “Canelo” – Spanish for cinnamon – is the unmistakable red-headed Mexican who loves horse-riding and life in the city where he was born, Guadalajara, who has three brothers who boxed, and the odds on his being anything else but a fighter in a country so immersed in the sport were always infinitesimal.

Alvarez has been fighting all his life, and has boxed for a living since he was 15. He is nearly eight years younger than the 35-year-old Gennady Golovkin, and they have arrived at this point along different roads. Golovkin’s culture was steeped in the amateur game and he was a renowned operator, robbed, according to many, of an Olympic gold medal in 2004. But he saw plenty of unsanctioned violence on the streets of Karagandy when growing up.

As a youth, two of Golovkin’s older brothers, Sergey and Vadim, soldiers in the former Soviet Army, would encourage him to engage in fights with older men. Both were killed in action and, while Gennady remembers the hard upbringing they imposed on him, he distances himself from that memory.

He lives in Los Angeles, a millionaire, and, in his simple and charming way, has turned himself into an immensely likeable and marketable character in a sport not known for shifting merchandise. As the WBA, WBC and IBF middleweight champion said this week, “that was different back then. Some have street fights, bar fights but I am a professional athlete. I am a boxer. I respect my sport.”

It says much for their pure boxing skill that their inarticulacy in English has not hindered their careers. Alvarez understands the questions perfectly well but prefers to answer in Spanish and leave the final constructions to his interpreter. Golovkin carefully picks his way through his responses in English, pausing to check mentally if he has given the right emphasis. He is as meticulous in front of the media as he is constructing a concussive right cross.

He is aware, also, of the largely unspoken spectre of his calling: injury and death. He has referred to the perils of boxing increasingly lately; perhaps the arrival of a child and the advancing years are searing their way into his consciousness.

“One punch can change your life,” he says. “Because of my power, I see it all the time from my work with my sparring partners. Sometimes I see what happens. So many people are hurt in fights. It’s not hard for me to balance that. I understand it. It’s very dangerous. This is not a game. Go too far, you know you’re not going back home, you’re going to a hospital. Everybody understands that.”

Alvarez, a counterpuncher with power that can scramble the senses because he throws his best shots from undetected areas, is unequivocal about his intentions. “I’ve prepared like never before, to look for the knockout, to give the fans a beautiful fight.”

“The styles add an ingredient that will go to make this historic, a fight that will go down in history and be remembered for many years. Simply put, the people wanted this fight. This is not only for money. It’s for my country, for my people, for my team, for me. My mentality is 100 per cent to win. Every night before I go to bed, that’s all I think about. I’ve always believed it.

“He has many [vulnerabilities]. They are there. You’ve go to just know how to find them, attack them. He’s an aggressive fighter, comes forward to knock out. I’m a counterpuncher who’s gonna be right there, countering him strong.”

They are here to work, no question. This is so far removed from the extravaganza in the same T-Mobile Arena two weeks ago between Floyd Mayweather and Conor McGregor it hardly bears comparison. Golovkin has stopped 33 of his 37 opponents, and is a relentless hunter in the ring; he will not be in there dancing. Alvarez, who does his best work in reply, has stopped 34 of his 51 opponents, a seasoned operator who has improved markedly from the night Mayweather outboxed him at the MGM Grand in Las Vegas four years ago.

Golovkin knows Alvarez is not the same fighter, that he is a considerably bigger threat and he distances this occasion from that of a fortnight ago in forthright terms.

“This is a real fight, not just a [one-off] event or a show,” he says. “This is more important for boxing. Of course it is for money but it is a history fight.”

If he were to get a tattoo, he probably would have one like the young man who will be trying to render him unconscious on Saturday. They are different boxers but very similar human beings.