Hugh Armstrong putting Mayo distance running back on the map 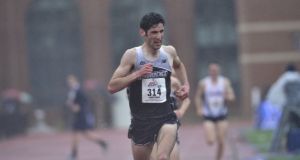 There’s a lot of talk these days about what it means to represent your country, or indeed your county, and Hugh Armstrong is shining the light on both fronts. With a gentle reminder of what it sometimes takes, and what it’s all about.

At age 23, and already through the grind of a four-year running scholarship in America, Armstrong will make his first senior appearance for Ireland in Sunday’s European Cross Country in Slovakia.

In some ways it’s been a long time coming but it’s unlikely to be his last, given his perseverance and progress.

As big a deal perhaps is the fact Armstrong becomes the first Mayo man to win an international distance running vest for Ireland in 45 years – going back to the 1972 International Cross Country in Cambridge. That race, the predecessor to the World Cross Country, first staged in 1973, featured Mayo-born Frank Greally, the now long-serving editor of Irish Runner magazine, in his first and only international appearance.

Greally still talks about what it meant to run for Ireland that day (especially on the same team that featured, among others, Neil Cusack and Tom O’Riordan) and for Armstrong it feels equally momentous. He’s not only putting Mayo running back on map, or indeed Ballina Athletic Club, but Connacht too.

“It’s very special, a very proud day for me, especially the first time,” says Armstrong, his Mayo accent in no way softened from those four years in Providence, Rhode Island, where he still lives and trains.

“And I know it’s been a long time since anyone from Mayo competed for Ireland. Most people here can’t remember. It also means a lot to my club, Ballina AC, and yeah, sometimes Connacht gets forgotten about too.”

Given his Mayo upbringing, Gaelic football was a natural influence, and Armstrong might well have gone down that road had athletics not got in the way. Indeed he’d played alongside of a few of the current Mayo senior team, Kevin McLoughlin being his neighbour in Knockmore, Conor Loftus in the same class in Gortnor Abbey Crossmolina.

“I would have played football up to minor, but never for the county. At that stage I wasn’t improving as much with the football, so I concentrated on the running. I liked it, but had to let it go. I’d still follow the team intensely, especially in America, and watch every game on GAA Go. Obviously hoping they’ll win that All-Ireland some day.”

Any regrets about his choice of sport?

“No, definitely not. Running can be tough, starting out in college in America. There’s a big difference when you first go over at 18, 19, racing fellas who are 22, 23. So it took a bit of time to adjust alright.

“The schoolwork can be fairly intense as well. I studied maths. And the standard is very high. I certainly got a fright in my first few races, but I kept making improvements every year, and that’s the important thing, my senior year, when I was captain of the team, one of the best.”

Indeed Providence College served him well, helped by the strong Irish connection (Ray Treacy, brother of John, is head coach). After graduating last May he reached the inevitable crossroads, and decided to stick with the study/training lifestyle (he’s currently doing an MA) while chasing some higher goals.

The first test of that came in last month’s National Cross Country in Abbotstown, the trial for Slovakia. It was a true run race and Armstrong, true to his own form, made the podium in third, behind winner Paul Pollock, after battling Kevin Dooney all the way to the line.

“I knew I was fit, so was always fairly hopeful,” he says. “Even though I’m out of the American system, but there was no question of me not continuing. I wanted to stick with it. And I think it shows athletes are still improving after coming through it. I don’t think I’d still be competing at this level if I didn’t go to America. It was definitely the right decision for me.”

Dooney is also a graduate of Yale, and the senior men’s team for Sunday also features Sean Tobin, in his final year at the University of Mississippi.

Getting to Slovakia means a lot to all six, even if it means running against the likes of a Turkish team, where four of the five men are Kenyan-born, and still train there.

“There’s much you can do about it, except run your own race,” says Armstrong. “It’s probably not doing much for Turkish running either, because it’s doing their own runners out of a place. It should be about promoting your own country.”