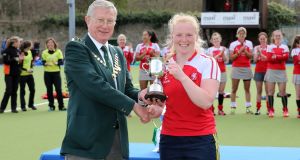 File photograph showing Ayeisha McFerran accepting the Best Goalkeeper award in 2015. She has been honoured in the US following her impressive season. Photograph: Gary Carr/Inpho

Irish hockey players have enjoyed considerable success on the college front in the United States in recent years, Emma Russell and Roisin Upton among those who made a name for themselves during their spells with Syracuse and the University of Connecticut, respectively, both picked by the National Field Hockey Coaches Association for their “All-American” teams of the year.

And this week goalkeeper Ayeisha McFerran earned that honour for the second year running. The 21-year-old from Larne, who played with Randalstown and Pegasus before taking up a hockey scholarship at the University of Louisville in 2015, has been in exceptional form this season, earning her the highest honour in US college sport.

McFerran, who, despite her youth, already has 65 senior caps to her name, missed August’s European Championships with a foot injury and in her absence since then Grace O’Flanagan, Clodagh Cassin, Emma Buckley and Liz Murphy have all been given a chance to stake their claim to the number one jersey.

She should be back, though, for what will be a busy build-up to next summer’s World Cup in London, with three games against Britain at Bisham Abbey in March just added to the schedule. The bulk of the British squad is likely to make up the England panel for the World Cup, giving Ireland an early taste of what they’ll face come June – they were drawn in a pool with England, as well as the United States and India.

Meanwhile on the club front, UCD will look to retain top spot in the Hockey League when they take on Ards at Belfield on Saturday, a fortnight after beating the same opposition 3-1 in the Irish Senior Cup. Second-placed Cork Harlequins are away to Loreto, while Pegasus, in third, host Belfast Harlequins at Queens.

Bottom two Pembroke Wanderers and Monkstown both have a chance to improve their standings over the weekend, the sides at home to Railway Union and Trinity, respectively, on Saturday, before meeting at Serpentine Avenue on Sunday.