The Ashes: What we’ve learned from Brisbane and Adelaide 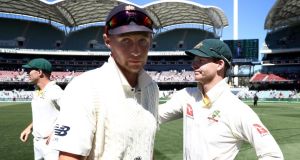 England have not been pulverised as they were in 2013-14. Theirs is a different kind of pain, the torment of life’s cruellest question: what if? History can also be written by the vanquished, even if few people want to read their version; and though Australia have been the better team, England will reflect on their inability to either recognise or seize a number of key moments. At Brisbane they were 246 for four in the first innings, and then had Australia 209 for seven before the mysterious case of the absent Jimmy Anderson. And they will forever wonder what might have happened had they performed in the first innings at Adelaide as they did in the second. This is shaping up to be England’s most frustrating tour of Australia since 1990-91, when they were competitive in all five Tests – and still lost 3-0.

Hope is not an abstract concept. The mind paints vivid pictures of how dreams might become real. Almost every visualisation of England retaining the Ashes had Alastair Cook scoring runs in industrial quantities, wearing down Australia’s four-man attack in the baking sun as he did seven years ago. Cook looked a bit better at Adelaide but 62 runs in four innings is sadly short of par. The same is true of Joe Root’s aggregate of 142, even though he is England’s leading run-scorer and played admirably on the fourth evening of the second Test. Their struggles have put too much pressure on the other batsmen. The decision to move Moeen Ali above Jonny Bairstow, hard to fathom at the start of the series, now looks almost perverse.

Nathan Lyon might be cricket’s Bryan Cranston, the character actor who became a leading man late in his career. He has had a profound impact on the series from day one in Brisbane, when he kept England in check on an unexpectedly slow pitch, and has since feasted on a batting line-up that could have been tailored for him: six left-handers, four of them in the top six. Ten of Lyon’s 11 wickets in the series have been lefties. The right-handers have been able to survive against Lyon but no one has been able to attack him: his series economy-rate of 2.29 runs per over is the lowest of his career. He has also destroyed Moeen in both their head-to-head contests, outbowling him emphatically (11 wickets at 23 v two wickets at 98) and dismissing him in all four innings.

“Sixties aren’t enough. We need 160s.” Trevor Bayliss’s pre-series comments sound increasingly like a clairvoyant’s warning at the start of a horror film. James Vince’s 83 at Brisbane – which seems an age ago, for the team and especially him – is the highest of five 50-plus scores by England batsmen. England have not only struggled to convert fifties into hundreds, they have also been unable to turn starts into fifties. An England batsman has been out between 15 and 49 on 18 occasions, twice as often as Australians have. And while Australia’s record of two hundreds in two Tests is not going to inconvenience the statisticians, it’s telling that Steve Smith and Shaun Marsh were the man of the match in each Test. By converting fifties into hundreds, they helped turned potential defeat into crushing victory.

England’s batsmen have had three overs of respite in the whole series. Three lovely, gentle overs of part-time leg-spin bowled by Steve Smith in the second innings at Brisbane. The rest has been a relentless examination. There are no weak links in Australia’s four-man attack; there aren’t even any average links. Batting against them is like a cricket version of Tetris in which the demands on your skill and concentration build to breaking point. And, as in Tetris, each of the pieces do something a bit different: the way Mitchell Starc, Josh Hazlewood, Pat Cummins and Nathan Lyon complement each other brings to mind England’s Fab Four of 2005. All the Australian bowlers have series averages below 30; all have, at different times, staged the kind of intervention only champions can manage. England’s attack cannot compare for depth, speed or revolutions on the ball. They have struggled with the old ball, and Cummins, Australia’s No9, has a higher series average than any England batsman. We thought England would miss the speed and reverse swing of Ben Stokes and Mark Wood. We didn’t know the half of it.

Hourihane gives Kenny a nudge as Aston Villa sweep past Fulham 20:05
Rafael Nadal up and running as he bids for 13th French Open title 20:23
Positive omens for Stephen Kenny ahead of Ireland’s Slovakia clash 20:00
Fixture pile-up means Spurs could sacrifice League Cup 18:07
Why did it take the Seahawks years to trust Russell Wilson? 17:33
Here is your handy guide to sport on television this week