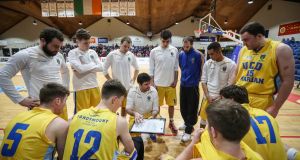 It’s the quarter-final stages of the men’s National Cup this weekend, with eight teams battling it out to secure a spot in January’s semi-finals.

The battle is all the more interesting as a new winner is set to be crowned this year after reigning champions Griffith College Swords Thunder were knocked out in the opening round by underdogs DCU Saints.

DCU now go on to face league table-toppers UCD Marian this weekend and will have a tough task in hand as UCD prevailed in their recent league clash.

But Marian coach Ioannis Liapakis is under no illusions this will be a tough assignment considering DCU’s recent cup form.

“We need to pause the marathon of the league now and focus on the sprint,” he said. “We know it’s a game without a tomorrow, and DCU Saints did an amazing job in the cup so far – they beat Swords Thunder away – so for us it’s going to be really difficult.”

Meanwhile, Black Amber Templeogue will host Éanna on Saturday evening in what is set to be another very close quarter-final. Éanna have already upset last year’s league champions this season with a big win at Colaiste Éanna.

“The cup is hugely important to us, and we really want to perform well and get the result,” said Templeogue’s Jason Killeen.

“Éanna will be a tough test – they’ve already proven that this year when we lost to them out in Éanna, so we won’t be taking anything for granted. We’re hoping that we will perform the way we know we can, and that, along with having the home crowd behind us, will hopefully get us over the line and into a cup semi-final.”

Elsewhere, last year’s cup finalists Pyrobel Killester will make the trip to Moycullen in Co Galway for a Sunday afternoon game. Moycullen came out on top the last time these two sides met in Dublin, and Killester’s Brian O’Malley knows they face a tough task.

“Moycullen already got the better of us in the IWA. Everybody knows the joy of the cup – the different atmosphere and the different intensity that it brings. We’ll have to be massively up for it because Moycullen at home, coached by John, are an excellent team.”

The final quarter-final between UCC Demons and Garvey’s Tralee Warriors will take place next Wednesday, December 13th, at Parochial Hall in Cork. This is also set to be a very close game as the sides have already met twice this year and have one win apiece.

Meanwhile, it’s regular Super League action in the women’s league. NUIG Mystics will welcome DCU Mercy on Saturday in what is set to be an interesting affair as the two sides will also meet each other in the Women’s National Cup semi-finals in January following wins over Portlaoise Panthers and Courtyard Liffey Celtics respectively last weekend.

Maxol WIT Wildcats will travel to Upper Glanmire to face Ambassador UCC Glanmire, while Pyrobel Killester will be aiming to keep their unbeaten home record intact as they host Singleton SuperValu Brunell. The final game of the weekend will see Courtyard Liffey Celtics battle it out with IT Carlow Basketball.

The Basketball Ireland players and coaches of the month for November were also announced this week. It was a double win for UCD Marian in the men’s Super League as head coach Liapakis and player Mike Garrow picked up the coach and player of the month awards.

In the women’s Super League, DCU Mercy player Tiffany Corselli scooped the player of the month award, with Pyrobel Killester’s Karl Kilbride winning the coach of the month after an unbeaten run in November.

In the men’s Division One, Ballincollig head coach Kieran O’Sullivan secured the coach of the month award after a brilliant winning run in November, while Fr Mathews’ player Marcus Thomas scooped the player of the month award.

It was a double win for Fr Mathews in the women’s Division One, with head coach James Fleming and player Niamh Dwyer winning the coach and player of the month awards.