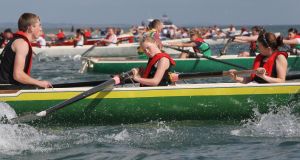 There is promising action on the water in Cork and Leitrim this weekend – and some drama off it.

The ICRF have labelled the new initiative by Rowing Ireland a “hostile campaign”. Mary B Teehan of the ICRF said that “the copyright” for the one-design boat is controlled by their body. “We will not tolerate that boat being used in other championships.”

Teehan confirmed that the All-Ireland Coastal Championships will be held in August in Wexford, adding that the ICRF have been involved in organising the event for over two decades.

The new coastal championships, under the auspices of Rowing Ireland, were fixed for August 18th and 19th at the National Rowing Centre after a meeting attended by 27 coastal clubs last weekend. The championships will be hosted by Rushbrooke Rowing Club from Cobh.

Teehan says that many of the clubs involved in the new initiative were not active in the ICRF and that new clubs will come into the ICRF structures so that “membership numbers will not be affected”. She says that the ICRF, at present built around associations, is in the process of redrawing its rules to make clubs more central.

It does not look good for the ICRF that Donegal Bay Rowing Club, which hosted the last two All-Ireland Coastal Rowing Championships, is part of the group which has been involved in championing the new structures. Teehan says that while this club “hosted” the championships, the ICRF ran them.

It will certainly be interesting to see how mid-August pans out.

The National Rowing Centre will be busy tomorrow, Saturday. The entry at the Muckross Head of the River is of over 400 crews, and includes Paul O’Donovan, Olympic medallist and world champion in the lightweight single sculls.

Aileen Crowley and Aifric Keogh, the Ireland pair who finished eighth at the World Championships, and Denise Walsh, who finished sixth in the lightweight single, are also entered.

The Head of the Shannon in Carrick-on-Shannon is also set for this Saturday. The head features a strong Enniskillen entry and the clash of three crews in the men’s masters eights: Portora, Neptune and Athlone.

Portora Royal School has become part of Enniskillen Royal Grammar School. The Portora masters crew keeps alive a beautiful placename which can be traced back to the 15th Century: its derivation is though to be from Port Abhla Faoláin, the port of Faoláin’s orchard.

The junior rowing club, now competing as Enniskillen Royal Boat Club, continues to prosper and has advertised for a temporary assistant coach.

Denise Walsh is having a good week. The dedicated young rower was chosen as one of 12 athletes who have been awarded Olympic Solidarity Scholarships in the run-up to Tokyo 2020.

It’s a busy time for rowing in Leitrim, with the Lough Rynn course upgrading its facilities so that now there is a start (albeit without the fingers) and a finish pontoon on this impressive stretch of water.

Galway’s Dave Mannion has become co-ordinator of the Under-23 High Performance Programme. His fellow westerner, Damian Browne, showed good form at the Provinces Indoor Rowing Championships and has set off for the Canaries in preparation for his Atlantic Row. Browne will be joined by the four-man Relentless crew from Cork and Dublin.

From Northern Ireland comes another four-man crew, Home to Portrush. They are collecting for the Portrush Lifeboat.