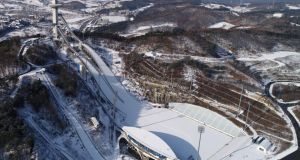 The presence of American athletes at the 2018 Winter Olympics in Pyeongchang is still “an open question” because of the continued tensions in the region, according to the United States’ ambassador to the United Nations.

The relationship between the US and North Korea remains extremely tense, which could raise questions of how safe it is for Americans to compete in neighbouring South Korea in February. North Korea carried out an intercontinental ballistic missile test last week, with the US and South Korea conducting extensive military drills in response.

Asked whether US athletes competing was a “done deal” or was still an open question, Nikki Haley, the US representative to the UN, told Fox News: “There is an open question, but in the talks we have it’s always about ‘how do we protect the US citizens in the area?’. So those are conversations that are happening daily.

“We have to watch this closely and it’s changing by the day.

“Certainly (the Games) are a perfect opportunity for them to go and do something they have all worked so hard for. What we will do is make sure we’re taking every precaution possible to make sure they’re safe and to make sure we know everything that’s going on around them.”