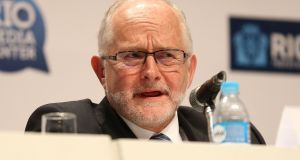 Seppelt’s reports on the country’s state-sponsored doping programme have made him a target for Russian anger and he was accompanied again by security staff at the press conference in Lausanne which announced Russia’s Olympic ban on Tuesday.

But he had already received calls that morning from somebody who sounded like Craven and who wanted to talk about Russia.

Sensing something was amiss, Seppelt contacted IPC officials and gave them the British phone number that called him.

IPC communications director Craig Spence explained that when he called the number it was answered by a “east European voice”.

Spence asked to speak to ‘Sir Philip’ and was told he would call back in five minutes. Spence immediately phoned back and the call went to a Russian voicemail message.

However, five minutes later, with Craven sitting alongside Spence at the IPC’s Bonn headquarters, the number did call back and ‘Sir Philip’ started to ask Spence questions. It soon became clear that these questions had been spliced together from several of Craven’s speeches.

Spence said: “We were very shocked when Sir Philip was called back by Sir Philip and I think this highlights the lengths people are willing to go to in an attempt to trip up sports administrators in the current period.”

He added they have passed the number to German police.

The 67-year-old Craven, who stepped down as IPC president in September, was the victim of a similar prank call in October 2016 when somebody claiming to be double Olympic 400 metres hurdles champion Ed Moses phoned him.

During that call, Craven made some critical remarks about Thomas Bach, his counterpart at the IOC, and a recording of the call was later released by Russian broadcaster RT.

Like Seppelt, the IPC has been targeted by Russian hackers and hoaxers after it took the decision to suspend the Russian Paralympic Committee shortly before the 2016 Rio Games.

That suspension is still in place, with a decision on what involvement Russian athletes will have in next year’s Winter Paralympics in Pyeongchang being announced in London on December 22nd.