How has Tom Brady miraculously defied the ravages of time? 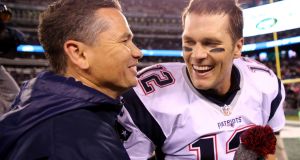 Tom Brady with Alex Guerrero who is his personal body coach and godfather to one of his children. Photograph: Elsa/Getty Images

Before the start of the NFL season, the New England Patriots restructured Tom Brady’s contract. In order to free up more salary cap space to strengthen the team in other positions, he agreed to a $10m signing bonus, a $4m base wage, and $5m in performance-related pay. Nobody took much notice of this act of selflessness until the end of the campaign when Brady’s failure to finish in the top five in passing yards, yards per attempt, touchdowns, completion percentage or passing rating meant the quarterback missed out completely on the $5m bonus.

With career earnings of over $200m, and a supermodel wife in Gisele Bundchen who takes home more than he does each year, Brady can absorb the financial hit. But, his absence from the upper echelons of the statistical categories by which quarterbacks are measured lent weight to the growing belief he may, finally, belatedly, be on the decline.

Even if hot takes about his supposedly waning powers are as much a feature of the NFL winter as him miraculously helming the Patriots to yet another Super Bowl, this campaign has yielded more compelling evidence than any other that the greatest of all time is actually starting to look his age – 41.

Brady’s repeated assertion he will play on until 45 now sounds like the braggadocio of a heavyweight boxer trying to convince himself muscle memory will be enough even though his jab has lost its snap.

Despite leading the Patriots to their tenth successive AFC East title en route to the playoffs, and topping the league in jersey sales, he has been guilty of questionable decision-making in scorable situations, horrific clock management, and too often reminding fans why no forty-something quarterback has ever won a championship. Just twelve months after being voted the league’s MVP, Brady’s repeated assertion he will play on until 45 (his current contract ends next year) now sounds like the braggadocio of a heavyweight boxer trying to convince himself muscle memory will be enough even though his jab has lost its snap.

For all that, the Los Angeles Chargers arrive in Foxborough this Sunday conscious that they have never won a game against the Patriots with Brady under centre. If the mystique and the legend surrounding him is an inevitable consequence of his on-field greatness, eight Super Bowl appearances, five wins, his continued presence 19 years after his NFL debut is also a testament to the way he has looked after himself.

Playing a position where opposing linemen are bent on your destruction every time the ball is in your hands, here is a man who has somehow defied the laws of nature and thwarted the ravages of time.

According to himself, he’s managed this wondrous feat by observing a strict diet (avocado ice cream is in, tomatoes are out), drinking two and a half gallons of filtered water each day, and heading to bed at 8.30pm every night, wearing his own brand of pyjamas lined with print technology reflecting “far infrared” that somehow promotes deep sleep and assists the body in recovery. He also adheres to punishing physical and mental training programmes under the guidance of Alex Guerrero, his personal trainer and lifestyle guru who preaches a gospel about the virtues of pliability.

At least that’s the official party line. It would be a lot easier to subscribe to the doctrine of Brady’s infallibility and to enjoy the annual marvelling at the miracle of his longevity if his closest confidante, Guerrero, didn’t have a resumé that includes passing himself off as a doctor while peddling a variety of snake oil supplements as cures for cancer, arthritis, Aids, MS, and concussion.

That was until the Federal Trade Commission shut down his junk science operation, and he ended up treating New England Patriots for injuries, a fortuitous career move that culminated in him becoming personal body coach to Brady, and godfather to one of his kids.

If it’s a relationship that, beyond myopic Boston fans at least, casts a legitimate shadow over Brady’s achievements, it’s also one that ruffles him in a way few linebackers have managed over the past two decades. Twice last summer, he shut down reporters daring to ask questions about the charlatan sometimes described as his spiritual guide. One of those queries regarded Julian Edelman, the Patriots’ wide receiver and a close friend, who tested positive for performance-enhancing substances while working his way back from an ACL injury last year.

Brady’s devotion to Guerrero and his bizarre methods is so cult-like it created a rift with Belichick, the character with whom he has rewritten so much NFL history

Although that recovery included so many lengthy sessions with Guerrero that Edelman dubbed him “Mr Miyagi” in an affectionate Instagram post, a journalist’s attempt to raise the issue of his steroids bust at a press conference caused a tetchy Brady to respond, “No comment. It’s ridiculous. I’m out.” Then he walked away.

A few weeks later, he abruptly hung up during a radio interview with Boston’s WEEI when the hosts raised the fact the former Dr Guerrero was back travelling on the Patriots’ plane after being previously banned from doing so by the coach Bill Belichick.

Brady’s devotion to Guerrero and his bizarre methods is so cult-like it created a rift with Belichick, the character with whom he has rewritten so much NFL history. It also spawned stories that he favoured team-mates who used his personal quack when dealing with their injuries.

While the most successful coach-quarterback tandem ever appear to have papered over the cracks in their relationship this season, the dynasty they built has never looked on shakier ground. Unless, of course, Brady can somehow turn back the clock. And, with Guerrero available to help, nobody can rule that out.