Tennis’ big four may be approaching their last hurrah

Federer, Nadal, Djokovic and Murray face pressure from a new generation of players 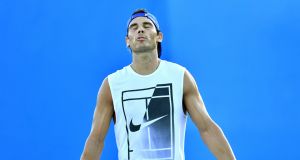 The four greatest male players in modern tennis – who between them have won more than €447 million across 16 years – arrive in Melbourne ahead of the Australian Open aware that their days as a dominant entity are numbered, if not already history. This could be Alexander Zverev’s time, or maybe the 2019 Australian Open will belong to Stefanos Tsitsipas or Daniil Medvedev.

And Australians might even celebrate their first home slam winner since Mark Edmondson 45 years ago if young Alex de Minaur can continue to perform minor miracles. At 212 in the world, Edmondson was and remains the lowest-ranked slam champion of the Open era; dreams do come true.

For Rafael Nadal and Andy Murray, however, there have been only recurring nightmares, and in the past week their thin prospects of revisiting former glories receded rapidly.

All around them, the young wolves are gathering. Only Novak Djokovic and Roger Federer from that golden era look capable of holding the line in five-setters – and they, too, are intermittently vulnerable, as Zverev showed in the ATP Finals in London in November, when he beat them back to back.

While it is unlikely Murray will withdraw before the start of the tournament on Monday week – as he did a year ago for hip surgery that delivered him hope but no miracle – his compadre is struggling to make it to the starting line with a shopping list of injuries that would keep an A&E ward busy for a month.

Nadal’s 32-year-old thigh joined his hip and other connected sinews in forcing his late withdrawal from the Brisbane International this week, his ninth in 13 of his most recent tournaments. Those are startling numbers, and they suggest the end is rushing at Nadal like a gored bull – although five tournament wins in 2018, including the French Open, alongside semi-final runs at Wimbledon and Flushing Meadows, illuminated the gloom.

He also beat Zverev on the clay of Valencia and Rome and Tsitsipas in Barcelona, as well as on the hardcourts of Toronto.

Murray, who beat only two top-20 players among five wins in 12 matches, had no such balm. When the loose-limbed young Russian power-hitter Medvedev blew him away in an hour and 21 minutes in Brisbane on Wednesday, the former world number one and three-time slam champion was reminded that, at 31, merely being competitive is going to be his biggest challenge over the championship fortnight.

And when Medvedev dug deep to beat Milos Raonic 6-7 (2), 6-3, 6-4 in the quarter-finals on Friday – saving three set points on his own serve to force the tie-break – Murray will have recognised a fellow grinder on the way up.

A year ago, Nadal was playing tennis reminiscent of his run to the title in 2009 and to the 2017 decider against Federer – until his collapse with a leg and hip injury in the quarter-final against Marin Cilic, a retirement that set in train a wretched completion record for the rest of his campaign.

“If we keep playing on these very, very hard surfaces,” Nadal complained later, “what’s going to happen in the future with our lives?” The answer might not be far away.