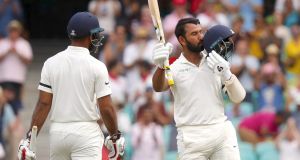 India’s Cheteshwar Pujara celebrates his century on the opening day of the final Test against Australia in Sydney. Photograph: David Gray/AFP/Getty

Cheteshwar Pujara’s third hundred of the series was the cornerstone of India’s innings on the opening day of the final Test against Australia at the Sydney Cricket Ground.

Pujara followed up his three-figure scores in victories in Adelaide and Melbourne with an unbeaten 130, having come to the crease in the second over of the day.

Mayank Agarwal contributed 77 at the top of the order, putting on 116 for the second wicket alongside Pujara, as India closed in an authoritative position of 303 for four.

The tourists, who need only avoid defeat at the SCG to seal a historic first Test series win on Australian soil, have been indebted to the form of their number three in recent weeks.

Once again laying the platform for a sizeable first innings score, Pujara took his tally in the four-match series to 458 runs with the prospect of more to follow.

He walked to the wicket after only nine balls as the restored KL Rahul edged Josh Hazlewood to the slips for nine, his fourth single-figure score of the series in five knocks.

But Agarwal and Pujara vindicated India captain Virat Kohli’s decision to bat first by showing plenty of steel on a pitch offering plenty of bounce and carry.

Agarwal was the aggressor early on, overcoming a blow to his elbow on 22 after being outdone by the pace of Mitchell Starc, while the initially watchful Pujara was rattled on the helmet by Hazlewood when on 14.

The hostile fast bowling refused to cow the pair, however, with Agarwal bringing up a half-century after lunch with a determined punch through the covers for four.

But just as he was looking to assert his authority, the opener holed out to Starc at long-on off Nathan Lyon.

Pujara went past fifty by taking three fours in an over off Marnus Labuschagne - one of two players brought into Australia’s line-up alongside Peter Handscomb, with Mitch Marsh and Aaron Finch dropping out.

Australia were given a boost in the first over after tea when Kohli was snaffled down the legside off Hazlewood 23 while Ajinkya Rahane got a glove on a rising delivery from Starc to depart for 18.

Pujara, though, was proving harder to dislodge and the 30-year moved to his 18th Test ton when he clipped Starc to the fine leg boundary for his 13th four.

He found a capable ally in Hanuma Vihari — shuffled down to the middle order to accommodate Rahul with Rohit Sharma dropping out of the XI — who ended the day with some self-assured strokeplay.

He was still there at stumps on an unbeaten 39 out of an unbroken stand of 75 with Pujara, leaving India firmly in the driving seat heading into Friday.