America at Large: Devout Rivers has Baltimore Ravens in his sights 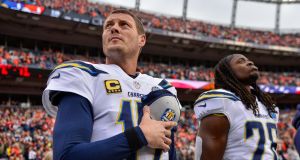 Quarterback Philip Rivers of the Los Angeles Chargers stands during the national anthem before a game against the Denver Broncos at Broncos Stadium at Mile High in Denver, Colorado. Photograph: Dustin Bradford/Getty Images

Towards the end of an NFL regular season in which he often looked a viable candidate to win Most Valuable Player, the Los Angeles Chargers’ Philip Rivers announced that his wife Tiffany is pregnant with their ninth child.

Nobody was too surprised. Over 15 seasons during which he’s started 208 consecutive games, put up Hall of Fame statistics, and earned $200 million, the quarterback has also espoused an especially devout brand of Catholicism, including regular public endorsements of the Natural Family Planning (NFP) method of birth control.

In a league where his former team-mate Antonio Cromartie gained national notoriety and his own reality television show through fathering 15 children with eight different women in half a dozen states, Rivers lives by a different creed.

Adhering to what the church in Ireland used to preach as the rhythm method, he is resolutely pro-life, gives interviews about the virtues of no sex before marriage, and, in a commencement address at the Catholic University of America, explained his faith citing quotes from CS Lewis, St Bernard of Clairvaux and Thomas A Kempis’s The Imitation of Christ.

“Our bond in the faith is the foundation of our marriage,” said Rivers of the woman he married at 19 while still a student at North Carolina State University.

“San Diego has a very solid Catholic community, which has been great for my wife and kids to make friends and be supported in the faith. This is very encouraging, especially when it comes to living out teachings of the Church that are not as popular as others. The most noticeable of these is being open to life, or what is commonly known as Natural Family Planning. When you see others making the same commitment to the faith as you are, it can only strengthen you.”

The Rivers continue to live in San Diego even though the Chargers relocated up the road to Los Angeles in 2017.

Unwilling to uproot his family, he hired a personal driver and spent $200,000 kitting out an SUV with televisions and all the equipment necessary to allow him watch footage of upcoming opponents during the 90-minute commute between the two cities.

In a sport where maniacal preparation and insane work hours are de rigeur, the mobile film room allows him to still be home with his kids by six most evenings.

Ahead of this Sunday’s wildcard playoff against the Baltimore Ravens, he’s been studying a troublesome outfit that just two weekends ago befuddled him so much he failed to throw a touchdown for the only time in this campaign.

With more post-season defeats than victories on his resume, Rivers just turned 37 and the clock is ticking on his efforts to remove himself from the list of best quarterbacks never to play in a Super Bowl. Some will argue that unless he rectifies that deficit, the country boy from Alabama can never be classified as truly elite, even though only five players ever have thrown for more touchdowns.

The chorus of naysayers may be prompted, at least in part, by his abrasive on-field persona. Apparently, the only time he stops trash-talking the other team’s defensive line is when he’s too busy whining to officials about penalties they should be awarding him.

When it was put to him that the constant bad-mouthing of rivals surely doesn’t fit with the message of Jesus Christ, Rivers pointed out he doesn’t say anything to the linebackers bent on his destruction that he wouldn’t say to his wife or mother.

Of course, his unpopularity in certain quarters may also be down to his holier-than-thou attitude to his peers behaving badly, a tendency that famously and justifiably earned the NFL the nickname the National Felons’ League.

“The biggest key to avoiding those temptations is to not put yourself in those situations,” said Rivers.

“And it’s not just as a NFL player, it’s in any workplace, in any city, anything you’re doing, anywhere after dark, after midnight, I think it’s Corinthians 11 says, ‘bad company corrupts good morals’. If you’re not in the wrong but you continue to put yourself in tempting situations, eventually, you may give in. So that’s always something I’ve lived by all the way through – don’t put yourself in those situations.”

Quotes of that ilk have brought him some unorthodox coverage from the media. To the consternation of many of his co-religionists, ESPN once asked him how he could possibly be a good father to so many kids. He handled that query, which came three children ago, with a simple answer about usually having only one baby in nappies at any given time.

Then again, this is a guy at ease holding forth on how, in order to protect their innocence, he doesn’t let his sons or daughters watch the racy television commercials that air during the NFL games their father plays in.

Whether this prohibition will extend to the Super Bowl in February depends largely on Rivers figuring out the Ravens’ unique brand of mayhem this Sunday. As is usual before every game, he will attend Mass early in the morning, wearing a crucifix and a medal of St Sebastian, a man who was martyred twice by the Romans and is the patron saint of athletes due to his physical endurance and unwavering commitment to spreading the faith.

“Once I’ve received the Eucharist,” said Rivers, “then I’m prepared to go out and play.”