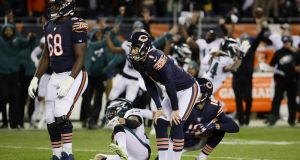 Cody Parkey of the Chicago Bears reacts after missing a field goal attempt in the final moments of their 15-16 loss to the Philadelphia Eagles in the NFC Wild Card Playoff game at Soldier Field in Chicago, Illinois. Photo: Jonathan Daniel/Getty Images

The Eagles are facing third and goal with one minute left in Sunday’s Wild Card Playoff match against the Bears. Chicago are leading, 15-10. Could Nick Foles do it again? His third down pass to Alshon Jeffrey goes incomplete and the clock stops. Eagles head coach Doug Pederson calls a timeout, the team’s first of the second half.

It is a risky choice, especially considering the clock is stopped and Philadelphia will need all three timeouts to keep the Bears from kneeling out the clock in the event the Eagles fail to score. No fourth-down conversion, no next game for Philadelphia. It’s do or die: just how Pederson and his defending Super Bowl champions like it.

Philadelphia had won five of their previous six matches heading into Sunday’s battle with the Bears after losing 48-7 in what appeared to be a season-ending blowout against the Saints in week 11.

Clutch moments became commonplace for the squad of underdogs after that loss, however, as Philadelphia recaptured the spirit of last year’s playoffs with last-second scores and defensive stops coming during the waning moments of must-win matches against the Rams and Texans late in the regular season.

For a moment, Sunday night appeared no different.

After the timeout, Foles snapped the ball and rolled to his right, tossing a side-arm pass to Golden Tate for a go-ahead two-yard touchdown with 56 seconds left to play. The score was now 16-15 and the Eagles were one two-point conversion away from a potential Bears field goal being able to tie – rather than win – the match.

A direct snap to veteran running back Darren Sproles on the two-point attempt fell just short of the goal line, giving Chicago just under one minute to drive down the field and kick a field goal to advance to their first Divisional Playoff Round appearance in 10 years.

Elusive Bears running back Tarik Cohen received the kick, bouncing off multiple tackles before being brought down at the Chicago 42-yard line with 48 seconds left in the match.

Parkey’s first kick cleared the uprights, but Pederson used Philadelphia’s final timeout to ice the kicker, whose 10 missed field goals tied for second-most in the NFL this season. Unfortunately for Parkey and Bears fans, his next attempt bounced off the goal post, onto the cross bar, and forwards into the end zone.

He missed it. The Soldier Field crowd fell silent as a stunned Bears team and incredulous head coach watched a season of redemption fade away at the hands of those pesky, underdog Eagles.

Shortly after the match ended, social media lambasted Parkey, wondering how a professional kicker could miss a straight, relatively short kick on his home field with no considerable wind in effect.

Parkey told the media he thought he hit a good ball, a claim backed by a slowed down frame-by-frame replay of the kick showing Eagles defensive tackle Treyvon Hester narrowly touching the ball on its way up, perhaps affecting its flight pattern.

Despite this, Parkey still should have made the kick, which looked like it might fall through the uprights even after hitting the left post. Perhaps a fly, or a random gust, or Hester’s finger altered the flight of Parkey’s kick last night. Perhaps it was just a bad kick.

To superstitious Chicago sports fans, the Bears are cursed. Others will say it was simply Philadelphia magic, which after a season of ups and downs is ready to be put to its biggest test against the Saints in the land of the Voodoo next week.

Play of the weekend

After throwing an incomplete pass on third down and goal with one minute remaining in the fourth quarter, Foles rolled to his right and connected with wide receiver Golden Tate for a two-yard touchdown pass to give the Eagles a 16-15 lead. While the play did not showcase stupendous serendipity or remarkable athleticism, its clutchness could not be overstated: if Chicago had made the stop, the match – and Philadelphia’s magical two-season run – would have been over.

Game of the weekend

Going into the fourth quarter of the match, the Seahawks led the Cowboys, 14-10. Despite the efforts of Ezekiel Elliott (who finished with 137 rush yards and a touchdown), the Seahawks defence held the Cowboys scoreless in the third quarter and had performed well throughout the game, giving the attack plenty of chances to extend the team’s lead. With 15 minutes separating these two teams from playing in next week’s Divisional Playoff and heading home, however, Dallas showed their mettle and proved to be the better squad.

After the Cowboys scored on an Elliott touchdown run, the defence forced a Seattle punt on the Seahawks’s first drive of the fourth quarter. Momentum briefly swung in Seattle’s direction on the next Cowboys drive, as quarterback Dak Prescott threw what appeared to be a costly interception with Dallas leading, 17-14. The Cowboys defence stepped up despite the Prescott interception and forced a second consecutive Seahawks punt on three plays.

On the ensuing Cowboys possession, Prescott led the team on an 11-play, five-minute touchdown drive to extend the Dallas lead to 24-14. The Seahawks scored a touchdown and a two-point conversion on the next drive, but time was against them. Seahawks punter Michael Dickson’s onside kick fell harmlessly into the arms of Dallas’s Cole Beasley, sealing the victory for the Cowboys and ending the weekend’s most back and forth match.

Next week’s AFC Divisional Round previews

MVP candidates Patrick Mahomes and Andrew Luck square off in Saturday’s 9:35pm (GST) match in what projects to be one of the most electrifying contests of the postseason. The Chiefs hope to add to the strong history of AFC No.1 seeds moving deep into the playoffs while the Colts will look to ride the momentum of their 21-7 victory over the Houston Texans in the Wild Card Round.

Team Rankings (based on points for/against)

Philip Rivers and the LA Chargers will look to continue their storybook season with a victory against Tom Brady and the New England Patriots in Sunday’s 6:05pm (GST) AFC Divisional match. The teams last met in week eight of the 2017 NFL season, with the Patriots winning, 21-13. The teams last faced off in the playoffs in the 2007 AFC Championship, which the Patriots also won, 21-12.

Next week’s NFC Divisional Round previews

The Cowboys will head to LA coming off a 24-22 victory over the Seahawks during Wild Card Weekend. Following Ezekiel Elliott’s 137-yard rushing performance against Seattle, the Cowboys will once again look to exploit the run game as the Rams rush defence ranks 23rd in the league. Coming off a bye, Sean McVay and his balanced LA squad will likely seek to neutralise Elliott early and force Cowboys quarterback Dak Prescott to beat them. The teams last played during week four of the 2017 season in a game the Rams won, 35-30. Irish fans will have to stay up late to catch this match, as kick-off is set for 1:15am (GST) Sunday.

The Eagles will be looking for redemption in this 9:40pm (GST) Sunday match, as New Orleans dominated Philadelphia in the teams’ week 11 contest, 48-7. The Eagles have gone 6-1 since that loss, however, with impressive must-win victories over the Rams, Texans and Bears. The Saints, meanwhile, looked to have lost momentum during their final three regular season matches heading into a first-round playoff bye.