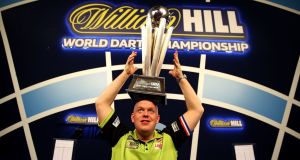 Never let it be said darts players are unconcerned with political matters after Michael van Gerwen used the occasion of his third PDC world championship title to make his feelings clear on Brexit.

The Dutchman received a message of congratulation from the Netherlands prime minister, Mark Rutte, after defeating the English rookie Michael Smith 7-3 at Alexandra Palace on Tuesday. Rutte has been voluble in the Brexit debate and while Van Gerwen says he is not his biggest fan he sided with Rutte as he declared Brexit to be “horrible” – and not just because it is eating away at his prize money.

“I hope I’m going to get a visa,” the champion said after receiving the Sid Waddell trophy. “It’s horrible isn’t it. Did you vote for Brexit? Brex-s**t. I don’t like it. Look at the pound and the euro. I get everything paid in pounds so just have a look how much it dropped. Let’s say it dropped by 10 per cent, that’s cost me 10% of my prize money straight away. So that’s quite a lot of money. But it’s not only that. It’s horrible.”

As for Rutte, Van Gerwen said his premier had told him “that he was glad I did it for Holland and blah, blah, blah”. But when asked if he could persuade Rutte to help stop Brexit, Van Gerwen said: “It’s not him is it. It’s your prime minister who did that, eh?”

Now 29 and with career earnings of £7 million, Van Gerwen believes he can go on to dominate the sport in the next decade. With plans to retire by the age of 40, he admits he will not be able to match Phil Taylor’s record of 16 world titles but hopes to emulate The Power’s longevity at the top.

“16 titles are impossible, I won’t be around that long” Van Gerwen said. “But I’ve been the king of darts for the last five years so why not a decade? Keep the positivity going, that’s the most important thing. I like what I do. I love it and I work really hard to do things like this. People that know me know what it means to me and it means a lot.”

Van Gerwen will compete in the Premier League of Darts when it begins on February 7th at the Newcastle Metro Arena. Until then, and after a year he describes as “difficult”, he plans to rest. “The first thing is to go home,” he said.

“My own sofa that’s going to be my treat. Then I’m going to go on holiday with my wife and my baby. We’re going to the Philippines. First to Disney World in Hong Kong and then there. We’ll enjoy the time.”