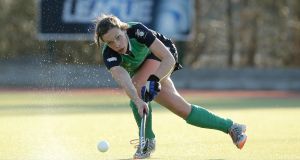 Dr Cliodhna Sargent, a researcher with a PhD in Biological sciences and former international player with the women’s Irish hockey team has pushed back against Hockey Ireland over what have been seen by some as draconian penalties introduced to teams who hold genuine concerns over travelling to matches under Covid-19 regulations.

Sargent has hit out on Twitter over the zero tolerance policy adopted by Hockey Ireland over clubs who have expressed reservations about travelling the country. Last week a number of teams refused to travel to Dublin to play matches. They will now be heavily penalised for not fulfilling future fixtures.

In a list of sanctions issued by Hockey Ireland, 3-0 and 5-0 losses will be recorded if the teams do not travel and compete in scheduled matches. Disqualification is also a possibility if teams refuse to play.

“A team refusing to fulfil a fixture played under Hockey Ireland Return to Play protocols citing Covid-19 concerns shall be considered to have forfeit the fixture. The match will be recorded as a 5-0 loss for the defaulting team and the match awarded to the opposing team. The defaulting team will also forfeit home advantage in their next scheduled home fixture between the clubs,” said the Hockey Ireland statement.

“Where both teams refuse to fulfil a fixture a 5-0 loss will be recorded against both teams. Both teams will also forfeit home advantage for a future match. A club cannot gain an advantage from forfeiting a match.

“Where both clubs are subject to local restrictions due to the impact of Covid-19 restrictions they may request a postponement or apply to forfeit the fixture at no penalty other than the fixture being recorded as a 0-0 draw.”

On her Twitter account Sargent expressed disappointment at the stance inferring Hockey Ireland were out of step with current fears and genuine health concerns.

“Wow! Really @irishhockey really. This is how you treat players and teams who Express concerns over a virus that has killed thousands and left many more very sick!! Very disappointing,” said the former Irish player.

Three Cork clubs as well as Limerick side Catholic Institute did not travel to play their matches last weekend in the opening games of Irish Hockey League. All three Cork sides were due to travel to Dublin but decided not to travel with the capital at Level 3 of Covid restrictions. UCC were cleared to travel by the college but the team management, in consultation with the players, made the decision not to go to Dublin.