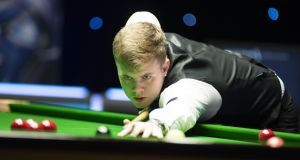 He has just beaten Ronnie O’Sullivan in his second professional game of snooker. But those who know Aaron Hill are not the least bit surprised.

The Cork 18-year-old called ‘The Breeze’ announced himself on Thursday night when he knocked the six times world champion out of the European Masters.

The mood-driven O’Sullivan can at times be erratic and his past has been riddled with matches where he has not shown up. But this was no fluke win by the teenager from Cork city.

“Absolutely not,” says outgoing secretary of the rebranded Snooker and Billiards Ireland, Tony Thorpe. “Just before lockdown in February at the European Championships in Portugal, Aaron defended his under-18 European title and then a couple of days later won the under-21 European title”.

“He is the past runner-up in the World under-16 championship. He was marked for stardom a long time ago and no it’s not a fluke at all. I was secretary for 11 years. I know of him since he started at under 14 level and he has won junior titles at under-14, under-16, under-18 and under-21.

“He’s a multiple winner of junior titles. He has won a senior event on our national tour when he was 16. He is top class and always has been and we all expected great things of him.”

Although O’Sullivan was a childhood hero, Hill’s nickname is a giveaway to the ideal temperament required to take on such a huge figure in the game and beat him. O’Sullivan, however, was not the only former world champion to exit in the second round with Ireland’s 1997 champion Ken Doherty knocked out by Mark Allen.

“You could say that he is the most exciting prospect since Ken Doherty and has the ability to reach the same level,” says Thorpe. “I watched the game and I watched it again this morning. Aaron believes he can beat anyone.

“He fully believed he was going to beat Ronnie O’Sullivan and he did. He has great belief in his own ability. That stands out all the time when you watch him play.

“At a high level he has been playing maybe five years. But in that time he has made remarkable progress. Our national coach, PJ Nolan, who is also the European coach, spotted his potential and has looked after him.”

As career starts in professional sport go, few could have drawn such wide attention than that of the kid who was on career curve in soccer and hurling with Glen Rovers. Then snooker bit four years ago and his rush to the brink of stardom has been almost unseemly.

“He is in his first year,” says Thorpe. “He won his first match 5-2 against a seasoned pro Andy Hicks and his match against Ronnie O’Sullivan was just his second match as a professional. So, it is all ahead of him. He has a lot to learn. But he learns quickly and he just has a great attitude.”