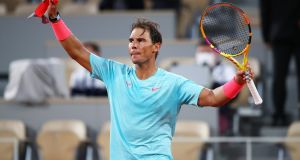 Rafael Nadal celebrates his first round win in the French Open. Photograph:Julian Finney/Getty

The Spaniard, who extended his record on the Paris clay to 94-2, will draw level with Roger Federer on 20 grand slams if he triumphs at Roland Garros.

World number 83 Gerasimov, from Belarus, was not expected to cause Nadal too many problems, and so it proved.

Despite a booming serve from the 6ft 5in powerhouse which held up to some early scrutiny, Nadal wrapped up a routine 6-4 6-4 6-2 win in a shade over two hours.

The tournament, moved to the autumn due to coronavirus, has a completely different feel to it, even for the most seasoned of campaigners.

Nadal said: “It’s a different Roland Garros. Of course we play in the same place. But the conditions are completely different than any other Roland Garros that we played.

“But the only thing I can do is just stay positive, do my job, try my best every single day.

“Even if the conditions are not the ideal ones, I will fight for my goals every single moment.”

Twice runner-up Dominic Thiem avoided a New York hangover as he opened his campaign with a convincing win over Marin Cilic.

The third seed was playing his first match since lifting his maiden grand slam trophy at the US Open two weeks ago and admitted that playing another major tournament so soon would be a mental challenge.

He was not helped by drawing another former slam champion in 2014 US Open winner Cilic, especially given the Croatian had taken a set off him in New York.

But it proved to be an unhappy 32nd birthday for Cilic, who took the match to Thiem but paid the price for too many unforced errors in a 6-4 6-3 6-3 defeat.

The Austrian said: “The main challenge was to get the match tension again. Because I was on fire in New York for two weeks, and then one week at home where I tried to relax but not lose all the tension, because obviously I want to do well here in Paris.

“I guess I found a good mixture, and I’m very happy with this first round today.”

Thiem, meanwhile, will not be put off by the cold weather in Paris, saying: “I know how to play in those kind of conditions, obviously, because in Austria we have many days like that.

“And then from junior times and when I started to play professional on the Futures in March in Croatia or Czech Republic, there were many tournaments with similar conditions. Cold, heavy balls.

“So it’s not really something new for me and it helps against guys like Marin, because it’s a little bit easier to return many serves back in the court and to run down almost every ball. So I like these conditions.”

In the next round, Thiem will take on American Jack Sock, who defeated his countryman Reilly Opelka 6-4 6-4 6-3.

There were some early casualties among the seeds, with eighth-ranked home favourite Gael Monfils bowing out 6-4 7-5 3-6 6-3 to Alexander Bublik.

And there was a marathon five-setter for the smattering of fans allowed into Roland Garros to enjoy, or endure.