Nairo Quintana says he has nothing to hide amid doping investigation 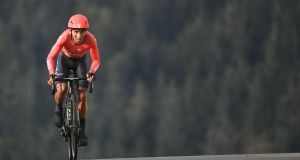 Colombia’s Nairo Quintana crosses the finish line at the end of the 20th stage of the 107th edition of the Tour de France. Photograph: Getty Images

Nairo Quintana has denied any wrongdoing and said no illegal substances were found during a search of his hotel room by authorities during the Tour de France.

The Colombian, a former winner of the Giro d’Italia and Vuelta a Espana, issued a statement late on Tuesday night after the public prosecutor’s office in Marseille opened a preliminary investigation into suspected doping practices.

On Monday, Quintana’s Arkea-Samsic team confirmed that their hotel rooms had been searched by police following stage 17 of the Tour in Meribel, and in his own statement Quintana confirmed he had voluntarily been questioned in relation to the probe.

Quintana said he had not been accused of wrongdoing by the authorities — and said the substances seized were “perfectly legal” vitamin supplements.

“The French gendarmerie carried out an operation in the hotel where my team was staying on Wednesday, September 16th, in Meribel, after the Tour de France stage ended,” Quintana said in a statement.

“That day, the authorities entered my room and seized vitamin supplements that were perfectly legal, although perhaps unfamiliar to the French authorities. This is the main reason why it takes time for everything that happened to be fully clarified. To avoid any doubt, I would like to confirm that no doping substances were ever found.”

A statement from Arkea-Samsic released on Monday had said the investigation was not focused “directly” on the team and involved “a very limited number of riders, as well as their close entourage, not employed by the team”.

In his statement, Quintana said he did not work with any assistants or staff who were not team members.

“I would also like to clear up a misunderstanding: neither during the recent Tour, nor during any other previous race, I have never consulted assistants or staff who were not part of the team. I do not have, and have never had, anything to hide,” he said.

The 30-year-old added that he had answered questions from the public prosecutor’s office “with a clear conscience”.

“It must be stressed that I have not been the subject of any accusation by the authorities,” he said.

“For my part, I am, and I will be ready to answer any questions from the prosecutor, as I did on Monday and (Tuesday).”

Quintana, who had three times finished on the podium in previous Tours, suffered a crash on stage 13 of this year’s race and then cracked on the Grand Colombier two days later, fading to finish 17th. It was his lowest finish in a Grand Tour since the 2012 Vuelta.

“I, Nairo Quintana, have been a clean cyclist throughout my sporting life and I have an impeccable biological passport,” he said.

“I want to make it clear to the public, to my fans and to the followers of cycling that never in all my career — junior, under-23 and professional — have I used illegal substances that improve my sporting performance and that betray the principles of sport.”

According to reports in France, two individuals have been taken into custody in relation to the investigation.

On Monday, the UCI said it had been in contact with authorities involved in the investigation.

“The UCI welcomes and supports the action of all parties involved and will take the appropriate measures once it has taken note of the information obtained by the French legal authorities,” a statement said.

Arkea-Samsic said on Monday that if wrongdoing was discovered the team would “immediately dissociate itself from such acts and take without delay the necessary measures”.

1 Seán O’Brien: Anger over my parents’ break-up never left me
2 Plenty of positives for Farrell as Ireland hit the ground running
3 Ireland braced for a daunting assignment in Paris
4 Will Connors chops his way to the front of Ireland’s openside queue
5 Ireland 50 Italy 17: Ireland player ratings
Real news has value SUBSCRIBE