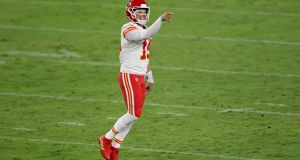 Patrick Mahomes during his team’s win over the Baltimore Ravens on Monday night. Photograph: Getty Images

Patrick Mahomes passed for 385 yards and four touchdowns and also rushed for a score as the Kansas City Chiefs recorded a 34-20 victory over the host Baltimore Ravens in Monday night’s showdown between two of the NFL’s best teams.

Chris Jones stood out on the defensive side with two of Kansas City’s four sacks and he also two forced fumbles as the Chiefs started 3-0 for the fourth consecutive season.

Lamar Jackson completed 15 of 28 passes for a mere 97 yards and one touchdown for Baltimore (2-1). The passing output was Jackson’s lowest in 25 games as a starter. He also had 83 rushing yards on nine carries for the Ravens, who also received a kickoff return score from Devin Duvernay.

The Ravens had just 228 yards of total offense after averaging 394 yards and 35.5 points over their first two games. The Chiefs had 517 yards while holding a 29-16 edge in first downs and converting 10 of 13 third-down opportunities.

Baltimore trailed by 17 at halftime but got back into the game on a 42-yard field goal by Justin Tucker with 6:13 left in the third quarter and Jackson’s five-yard touchdown throw to Nick Boyle on the first play of the final stanza to pull within 27-20.

But Kansas City answered with a 13-play, 75-yard drive and coach Andy Reid pulled out one of his trick plays on first-and-goal from the Ravens’ two-yard line. Fisher pretended he was blocking and then slid into the left flat to catch the scoring pass from Mahomes on the tackle-eligible play with 8:14 remaining to make it a 14-point margin.

The Ravens reached the Chiefs’ 13 on their next drive but Ben Niemann and Frank Clark sacked Jackson on back-to-back downs (second and third) to account for 18 yards in losses and Jackson’s fourth-and-24 pass was incomplete with 4:55 left to end the suspense.

Mahomes passed for three touchdowns and ran for another as the Chiefs held a 27-10 halftime lead. After Tucker capped Baltimore’s first possession with a 26-yard field goal, Kansas City moved 75 yards on six plays with Mahomes scoring the touchdown on a 3-yard run.

The Chiefs drove 68 yards on 13 plays on their second chance with the ball and the drive ended with Mahomes tossing a five-yard shovel pass to Sherman to make it 13-3 with 12:52 left in the first half.

Duvernay displayed his speed on the ensuing kickoff by returning it down the right sideline for a 93-yard touchdown. But Kansas City’s offense kept clicking as Mahomes threw a 20-yard scoring pass to Hill and a 49-yarder on third-and-14 to Hardman to account for the 17-point advantage.