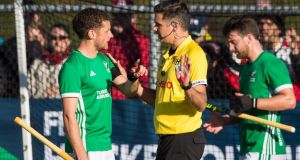 Ireland’s Jonathan Bell discusses a video review with the referee that led to Canada being awarded a penalty shot with no time left during the second half of the FIH Men’s Olympic Qualifier match at Rutledge Field in Vancouver. Photograph: Darryl Dyck/Sportsfile

Hockey Ireland (HI) has condemned the video referral system for the Olympic qualification event in Vancouver last October that saw Ireland controversially fail to qualify for the Tokyo Olympics this summer. HI said in a statement the system was not fit for purpose.

In the second men’s Olympic qualifying match against the home side Ireland lost on penalties following a Canadian equaliser in the final seconds of the game.

The equalising goal came from a penalty, which was awarded after the use of a Canadian video referral, where the angles and quality were limited. Ireland subsequently lost out on an Olympic berth following a penalty shootout in which they led 3-1.

“Hockey Ireland are of the view that the broadcast quality and number of camera angles available in respect of the qualification series were not of a level to facilitate Video Referral,” said a HI statement.

HI added that the International Hockey Federation (FIH) has been unable to provide adequate responses to the queries raised following the series and it is their understanding that there are no specific minimum standards in relation to the set-up and delivery of the video referral system in hockey.

Irish hockey also sought clarification from the FIH in relation to the minimum standards to ensure adequate broadcast quality, as well as an availability of a minimum number of camera angles. The FIH have been unable to provide any clarification.

The difficult part for the Irish players, who have nothing to play for this year because of the Olympics, is to accept that there is no way the result against Canada can now be challenged.

“Hockey Ireland however, as a result of the lack of regulations in respect of Video Referral, have no grounds on which to challenge the FIH in relation to the incident,” the statement read.

“Hockey Ireland regrettably must therefore conclude that they have exhausted all avenues in respect of a potential appeal regarding the outcome of the series and the non-qualification of the men’s team for the Tokyo Olympic Games.”

The Irish women’s hockey team did qualify for Tokyo 2020 for the first time in history, when they won a penalty shootout against Canada in Energia Park after drawing over two legs.

1 Ian O’Riordan: An education in race and running during college days in America
2 Sports bodies must keep electronic records of participants as training sessions resume
3 Tianna Bartoletta: ‘After you’ve gotten your medal, you become black in America again’
4 Coming fourth in the Olympics didn’t change this fearless quartet, time did
5 Mature Ringrose keeping the ups and downs of rugby life in perspective
Real news has value SUBSCRIBE