Halep fights back against Stephens to prove Grand Slam credentials 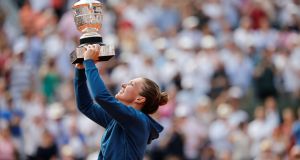 Romania’s Simona Halep celebrates by lifting the trophy after winning the final of the French Open against Sloane Stephens of the United States at Roland Garros in Paris. Photograph: Pascal Rossignol/Reuters

Already number one in the world, Simona Halep proved she could be a Grand Slam champion, too. After losing her first three major finals, Halep defeated Sloane Stephens, 3-6, 6-4, 6-1, on Saturday to win the French Open and join the ranks of top players who persevered before they gained a Grand Slam singles title.

Clijsters, here in Paris as a television analyst, is among the many who offered encouragement to Halep over the last year as she tried to rebound from her latest Grand Slam disappointments.

On Saturday, Halep finally broke through, becoming the first Romanian woman to win the French Open in 40 years. Virginia Ruzici won at Roland Garros in 1978.

To manage it, Halep had to come back from a set and a service break down, just as Jelena Ostapenko, her opponent in last year’s French Open final, had done against her. In the early stages of the match, Halep could find no holes in Stephens’s game as the American glided along the baseline, absorbing pace and striking when she sensed an opportunity of her own. It was as if Halep were not only playing on crushed red brick but also against a red brick wall.

But from 0-2 down in the second set, Halep was able to change the flow of the match. She reeled off nine straight points at one stage, breaking Stephens’s serve for the first time in the match and at love. Serving at 4-4, 30-30, Halep was still on the edge, however. But she played two bold, aggressive points, taking chances with her forehand inside the court.

After breaking Stephens to even the match at one set apiece, she jumped out to a 5-0 lead in the final set. In all, Halep won 12 of the final 15 games, serving out the match at 5-1 and then dropping her racket as she faced her team in the players’ box with both her arms held high.

“In the last game, I felt I could not breathe anymore, so I just tried to not repeat the last few years,” she said. “I did everything I could. Honestly, I could not believe. I was dreaming for this moment since I started to play tennis.”

To achieve it, she had to break the 10th-seeded Stephens’s undefeated streak in tour-level finals. Until Saturday, Stephens was 6-0, including a rout of Madison Keys, her American compatriot and friend, in last year’s US Open final, where Stephens capped a remarkably speedy comeback from a foot operation.

Although Stephens already knew what it took to win a major final, Halep has had a clear edge when they have played head-to-head. She has now won their last five matches.

They are both fleet and fluid baseliners of a similar age: Halep is 26, Stephens 25. Both can counterpunch, and also attack on their own when required.

Now they have even more in common.

Halep reads the game beautifully and flows around the court with a rare grace, and her quest for a Grand Slam title underscored her steely side.

“She’s done a very nice job of being able to put some disappointments behind her and get back to work and keep looking for improvements,” her coach, Darren Cahill, said.

She first came close to winning the French Open in 2014, losing a three-set final to Maria Sharapova. She got even closer in last year’s final against Ostapenko, an unseeded Latvian, before losing a one-set, 3-0 lead as Ostapenko took big swings and risks, most of which paid off.

The defeat left Halep reeling, and she lost to Sharapova in the first round of last year’s United States Open. But Halep regained momentum in the final two months of the season, rising to number one in the rankings for the first time.

At this year’s Australian Open, she scrapped her way through the draw. She saved a five match points on her way to the final, only to fall just short against Caroline Wozniacki, who won her first major title.

“Maybe the fourth time will be with luck,” Halep told the crowd at the awards ceremony then, shortly before checking into a Melbourne hospital with severe dehydration after the draining three-set match.

She has paid her dues and then some.

“I obviously feel very sad for her, but at the same time I’m very happy for myself,” Wozniacki said after the final in Australia. “I can only imagine how she must be feeling.”