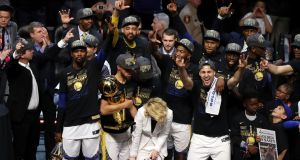 The Golden State Warriors secured their status as an NBA dynasty on Friday by steamrolling the Cleveland Cavaliers to claim a third title in four years, and one that might send LeBron James elsewhere to seek championships.

The fourth consecutive NBA Finals match-up between the two rivals proved to be the most lopsided as the Warriors clinched the best-of-seven series in the minimum number of games with a 108-85 victory in Cleveland to repeat as champions.

“We all want something that’s bigger than ourselves. I think we love to see each other succeed,” NBA finals most valuable player Kevin Durant told reporters. “We love to come together and figure stuff out on the basketball court.”

After a sub-par performance in game three, Warriors guard Stephen Curry responded with a spectacular shooting night by scoring a game-high 37 points, while James had a team-high 23.

The Cavaliers clawed back from an 11-point deficit before pulling in front on a slam dunk from James near the midway mark of the second quarter that brought the home crowd to their feet.

But it was only a matter of time before the Warriors, who boast perhaps the most potent offense the NBA has ever seen, took over, using a dominant third quarter to build a 21-point cushion that left the Cavs’ hopes of a comeback in their wake.

“We knew that they were going to come out with a tough first punch and we answered it and ran right back at them and set the tone for the whole game,” Curry said.

“They made so many runs over the course of 48 minutes but our will took over. Unbelievable feeling to come in here on a mission and get the job done.”

The Cavs had successfully faced down elimination three times this season but were unable to mount any threat of a rally in this one as the Warriors simply possessed too much firepower.

“Sometimes you can give everything you’ve got and still come up short, and I thought that’s what our group of guys did in this series,” Cavaliers head coach Tyronn Lue lamented. That’s about it.”

James later revealed that he played the final three contests with a serious and self-inflicted hand injury suffered after a game one overtime loss in which JR Smith ran down the clock rather than attempt a game-winning shot as time expired.

“I had emotions of you just don’t get an opportunity like this on the road versus Golden State to be able to get a game one, and I let the emotions get the best of me,” said James, wearing a brace on his right hand at his post-game conference.

“Pretty much played the last three games with a broken hand.”

For Cleveland, the loss sends the team into an off-season of great uncertainty as James, the best player of his generation, could sign elsewhere as a free agent after July 1st, which is widely expected given the relative lack of talent on the roster.

James, who was playing in his eighth consecutive NBA finals and fourth straight with the Cavs, has carried the team since he returned in 2014 but would likely need to see some key additions to keep him with his hometown team.

When James, who only attempted three shots from the floor during the second half, left the game with about four minutes to play, he did so to a standing ovation from a home crowd that were chanting “M-V-P, M-V-P.”

James said he did not yet know where he would play next season.

“When I decide what I’m going to do with my future, my family and the folks that have been with me for the last, you know, 20 years, pretty much, will have a say-so,” he said.

“Then it will ultimately come down to me, and so we’ll see what happens.”