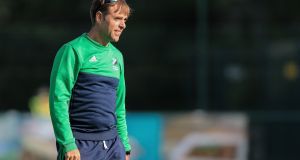 The Irish men’s hockey team lost Craig Fulton, voted the best hockey coach in the world last year, because Ireland could not provide a full-time programme for his Irish players.

A frustrated Fulton announced last week that he was leaving to take up a position with Belgium, just months before Ireland compete in the World Cup in India in December.

His departure sends Ireland’s preparations into crisis. Just six months from the finals, it can hardly have arrived at a worse time for the team, who had greatly improved over the four years Fulton was in charge.

“It was a big surprise for us,” said Hockey Ireland chief executive Jerome Pels. “There was a contract until after Tokyo [Olympic Games]. But there was always a way for both sides to break that. That’s the way it was set up.

“What he told us is that an opportunity came along for him and I think what he explained was the Belgium role would suit him more because of the long-term future for him. He also saw it as an opportunity to be involved with a full-time programme, which was in a way his dream.”

Fulton, who is married with two children, competed with South Africa in the 1996 and 2004 Olympics and was made head coach of Ireland in 2014.

It hits all the harder because Fulton follows on from the sudden departure of Paul Revington in 2012, who coached Ireland to within seconds of qualifying for London 2012. The defection has highlighted a depressing inability for the sport to hold on to major talent.

“I think his ambitions were great,” said Pels. “At the moment within the Irish set-up we couldn’t actually give what he wanted without having the availability of his players full time. I can understand that and saw the frustration for him ... not being able to coach on a weekly basis.”

Ireland have invited bids for a replacement and hope to have a quick solution in place by the end of the month, although they are not holding their breaths.

Whatever the outcome the team has been considerably disadvantaged, leaving a team of elite players in a system that has again let them down.

“It is going to be a hard act to follow,” said Pels. “We have an invitation for bids. We have set a date in two weeks’ time, where we want to see who has applied. We want to see what is possible and might have to do a short-term solution depending on what the response is.”

3 Frustration for 14-man Ulster as Leinster machine rolls on