Jack Doyle: A 20th-century Conor McGregor whose life spiralled down 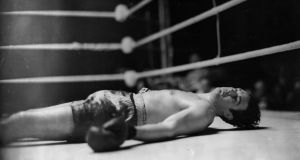 Doyle on the ring floor after being knocked down in the first round of his fight against Eddie Phillips at White City, London in 1939. Photograph: Topical Press Agency/Getty Images

The dappled sunlight spread further across the Tolka Park pitch. A faulty gramophone spat out the tune of Come Back to Erin. A capacity crowd at the old ground on Richmond Road waited in anticipation around a tiny wrestling ring constructed in the middle of the pitch, eager to get a glimpse of the man who had once brought London almost to a standstill by selling out White City and had years before tied the knot with Movita Castaneda, future wife of Marlon Brando.

Seconds later Jack Doyle clambered into the ring. In An Irishman’s Diary in The Irish Times the following week, Quidnunc wrote: “He was robed in a gown that might have been described as off-white, and he acknowledged his receptors a little absently-mindedly, with some of the air of a duchess who wasn’t sure if she had invited quite the right people to tea.”

The once-great heavyweight boxer, soprano and not-so-great actor from Cobh, Co Cork, was well into the downward spiral that would ultimately lead to his death in destitution, a long way from the bright lights of London and New York where he had become one of the most famous celebrities of the age. In a rags-to-riches story, when Doyle climbed into the ring in Tolka Park on June 8th, 1951, for an exhibition wrestling match against Italian-American heavyweight, Tony “Two Ton” Galento, the tale was very much reaching its last chapters and was on its way from riches back to rags.

The story of Joseph Doyle (he would later change his name to Jack) – born in Cobh in 1913 to a family living off penny dinners from the local convent – is remarkable for many reasons. The narrative of coming from nothing into everything, the red carpets, the endless parties, the womanising, the domestic abuse, the stints in prison and, most of all, the drinking sadly feature in the life stories of many boxers.

Even his acting career in Hollywood – which was short-lived and disastrous – is not that unusual for an ultra-famous sportsperson, while his penchant for singing, which saw him pack out the London Palladium and the Royal in Dublin, is just another element to a scarcely believable story.

But the real thing that stands out when it comes to Doyle’s sporting life is that he wasn’t that successful as a boxer. He was never heavyweight champion of the world, he was never even the British heavyweight champion. His one chance at taking that title came in front of 90,000 people in White City in London at the age of just 19, against Jack Petersen, but would end in farce as Doyle, according to eyewitnesses, did most of his warming up and had most of his pre-fight liquid intake at a nearby pub. In the ring he was disqualified in the second round for continually punching low, had his £3,000 fight fee withdrawn and was suspended from boxing for six months.

His career record – 23 fights, 17 wins and six losses – certainly wouldn’t set the world alight and, as Michael Taub wrote in Jack Doyle: The Gorgeous Gael: “He had no skill and the mentality that he wasn’t interested in learning. He had this explosive power. He led with a haymaker.”

Despite that Doyle shot to fame with 27 wins in 28 fights in the British Army Championships, after he had joined the Irish Guards at the age of 16. He caught the eye of boxing promoter Dan Sullivan, who helped him turn professional and then watched him win his first 10 fights inside two rounds, making him the biggest thing in British boxing. His chaotic shot at the British heavyweight title would follow shortly afterwards and, soon after that disaster, Doyle moved to the United States and turned to singing and acting. Not yet 20, he was already becoming more of a celebrity than a fighter. While his out-of-the-ring activities differ somewhat, some might say that he was the Conor McGregor of the 1930s and 1940s, and his later foray into wrestling does bear some resemblance to McGregor’s dabbling in boxing.

While in the US, Doyle continued taking some fights, most famously against Buddy Baer in 1935, when Doyle knocked the American down in the first round, turned to blow his wife in the audience a kiss and was promptly floored by Baer, who had got back to his feet.

The downward spiral began to accelerate and got particularly ugly when Doyle knocked his wife, Movita, unconscious one Christmas Day, causing her to miscarry their child. Shortly afterwards Doyle returned to Ireland and fought his last professional bout against Mullingar heavyweight Chris Cole at Dalymount Park where, according to The Irish Times, Doyle was “knocked silly in the first round. The fight lasted just a minute and a half, and for about half that time Doyle was lying on the ropes or being pummelled with smashing lefts and rights.”

And yet, eight years later, Doyle wound up 1½ miles farther north at what was then the home of Drumcondra Football Club, for an exhibition wrestling match that would see him pocket a healthy cheque although, as he said himself in later years when he wound up living on the streets of London, most of his money ended up wasted on “slow horses and fast women”.

On that June evening in 1951, Doyle looked a shadow of his former self and, at 37, his days of being labelled “The Gorgeous Gael” were behind him, with a fair few pounds packed on to his huge body.

As Quidnunc wrote in An Irishman’s Diary: “I became conscious of a growing irritation that Signor Galento did not seize his chance to gain a decisive grip on Mr Doyle by the nethermost of Mr Doyle’s chins. He could easily have had two fistfuls of it at any time, and once strategically attached thus, he would have been very hard to shake off.”

Galento himself was not a small man and hadn’t gained the nickname of Beer Baron and Two-Ton Tony for nothing. The sight of two huge specimens grappling with each other, every sinew of their 6ft-plus frames straining to hurt the opponent, thrilled the audience who, as it was pointed out in The Irish Times report the following day, climbed over the press bench and into the ring itself after Doyle had won.

The manner of the Irish man’s victory was quite brutal, as both fighters came crashing out of the ring, leaving Galento injured in a heap on the ground and sending the journalists at the rickety press bench flying out of their seats as chaos ensued.

“Doyle, who had landed on top of Galento, was pushed through a milling throng back into the ring,” reports The Irish Times.

“But Galento, his face twisted in pain, lay on the flat of his back at the feet of many small boys. The ring was soon filled with scores of people; some tried to assist Galento to his feet, in spite of the referee’s cries that no assistance should be given; ambulance men rushed to help Galento, and it seemed, although no such announcement had been made – that was hardly possible – that Doyle had returned to Ireland a conquering hero.”

Doyle had indeed conquered, but his best days were long behind him. He would go on to take part in a few more wrestling matches, but his alcoholism and gambling continued, eventually leading to his penniless death in 1978 in Paddington at the age of 65.

This is part of a monthly series called From the Back Pages, examining stories and events that have made the sports pages of The Irish Times since 1859. If you have suggestions for stories you would like to see featured email rcroke@irishtimes.com or get in touch on Twitter @Ruaidhri_Croke. For more information on subscribing to the archive, see www.irishtimes.com/archive