Graham Shaw: ‘It’s incredible for the whole sport of hockey in Ireland’ 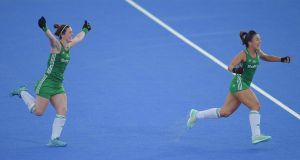 Graham Shaw hailed “the kid” Ayeisha McFerran as the one to assure him Ireland would win through in the shootout against India and earn their World Cup semi-final spot.

She saved three out of four in the decisive phase, giving the platform for the attackers to land three of theirs and continue this amazing odyssey.

“In the shootout, I knew if we scored two, we would win. The kid in goal is incredible and when you watch our own players try and score on her [in practice], it’s incredibly difficult.

“It gives us this incredible moment, not just for the team but for the sport of hockey in Ireland.”

He admits that while one half of his game plan worked perfectly, the attacking side of it did not quite work out. It led to a stalemate but he reckons that is not something he will linger on too long in the grand scheme of things.

“There was a real confidence going into the game,” he said afterwards. “We really felt we were physically better than them. We knew their strengths but we limited them and I don’t remember Ayeisha making a save with the exception of the corner.

“We executed the [defensive] game plan brilliantly. Obviously, we are looking for more quality going forward but we have been on the losing end of those games so it is fantastic to get over the line.

“We probably didn’t have the composure and quality in the final four that we are looking for but I will take it all day. Grinding out those results really shows what your team is all about. This is a special group of players and it is a privilege to be a part of it.”

Winning via a shootout was particularly sweet. Three years ago, the Green Army missed out on a first ever Olympic qualification by the width of a post against China in a shootout, a haunting moment for the side which stuck with the side for a long time.

“The demons are well and truly buried. It’s not a nice way to lose and it’s tough on India but we know exactly what it feels like. We lost in 2015 and it took a long time to get over that. When you are chasing Olympic dreams and it doesn’t happen because of the width of a post, it’s devastating.

“To come back, we had to go through qualifiers in Malaysia and Johannesburg. To continue on this journey and win again, it’s just a dream come true.

“It’s a credit to the girls, how they train and how they dedicate their life to this sport.

“In November, we sat down together as a group to try and create a culture to go forward and try and achieve something special. Part of that culture is to inspire the next generation and I think they most certainly have done that.”