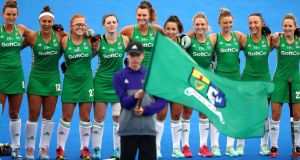 Ireland team members stand for the national anthem before the World Cup Pool B game against England. The disparity in resources between the two teams is stark. Photograph: Jack Thomas/Getty Images)

After Ireland beat India 1-0 to secure a first ever place in the World Cup quarterfinals in Queen Elizabeth Park in London’s east end, Taoiseach Leo Varadkar entered into the party mood.

Between final day meetings with EU leaders and congratulating the judges appointed by the President to Court of Appeal and High Court, he tweeted his congratulations to the Irish women’s team.

“Fantastic achievement, best of luck in the next round,” said Mr Varadkar.

In the fanzone, the tweet was greeted with a mixture of pride that he had noticed and a weary grumbling that to fully fund this historically successful women’s team would have been a more tangible recognition of what they had accomplished.

Then again he may not have been aware of what resources the Irish women face when they line up against other countries competing at the cutting edge of world hockey.

In Ireland, it is difficult to work out exactly what money goes into sport as it often comes in different tranches at different times of the year and under various schemes such as core grants, women in sport, High Performance funding and carding schemes.

In 2017 Sport Ireland allocated €10.81m to 58 Irish sports. The grants covered administration, participation programmes, coach development, hosting events, implementing strategic plans and the employment of professional staff. In other words hockey’s cut of the millions, €260,000, didn’t go to the athletes.

The sport was also given €35,000 for Women in Sport. Furthermore it drew €530,000 for the High Performance teams, the men and women national sides both preparing for World Cup events.

Sport Ireland also made provision through another form of funding, the International Carding Scheme, which beforehand it never had. It identified Hockey Ireland as a critical strategic area where international players needed to be assisted.

It added that it was continuing to engage with Hockey Ireland and Sport Northern Ireland with a view to enhancing a direct player support package in 2018. It did to the tune of €45,000.

Last month the Ireland men’s team coach Craig Fulton announced his departure from the Irish scene. With the men taking part in the World Cup in December, to lose the coach at that juncture was a devastating blow. One of his reasons for leaving was that he could not coach the team to such levels of performance where there was, with underfunded players, never enough money or time.

Players on the international women’s squad are asked to pay a levy of €550 a year to supplement their funding. The U-21 teams and schools teams are also asked to pay to play for Ireland. It is euphemistically called self-funding and goes right down to U-16 level.

In October 2017, Irish player Chloe Watkins told sport website The 42 what effect the €550 player levy had, not just in players having to take money from their pockets but the principle that on top of the other sacrifices made they are asked to pay to represent Ireland.

“Over the last two or three years we’ve had to fundraise as a team to cover the levy as it was getting too difficult to come up with that money ourselves,” said Watkins. “It’s an extra thing hanging over your head and it’s difficult to compete with teams who have huge resources when we’re actually paying to play for our country.”

It is even more difficult when Irish players know those resources available to their competitors in terms of trying to qualify for World Cup or Olympic Games finals and then progress from the pool of those competitions and into the knock phase as Ireland have done in London.

Following the Rio Olympic Games the UK Sport published the funding allocations for all of their Olympic sports for the four-year Olympic cycle between 2016 and the Tokyo Games in 2010. The UK system is designed to reward successful sports with greater funding and take away from sports that underaachieve at world level events.

In the Olympic hockey tournaments, where the 12 best men’s and women’s teams compete, the British men’s team came fifth in their Pool A, the same placing as the Irish men’s team in Pool B. But the British women won the gold medal in a penalty shootout against the Dutch following a drawn final match.

As uplifting as the Irish performance has been, it is an aberration and entirely down to the players and coaching team. Sponsorship from SoftCo has taken off some of the financial edges. But something must give. Whatever the outcome of the quarter-final, the Irish player pool, all paying their levy, will struggle to sustain this level of performance until the Tokyo Olympic qualifiers come into view.

1 Australian rugby staring into abyss as another crisis hits
2 Garry Ringrose to stay with Leinster as he signs two-year central contract
3 ‘For 25 minutes I ran out of oxygen’: Pepe Reina on his coronavirus battle
4 Six Nations rugby needs to be protected for terrestrial TV
5 My favourite sporting moment: Game, set and couch as Borg takes down McEnroe
Real news has value SUBSCRIBE