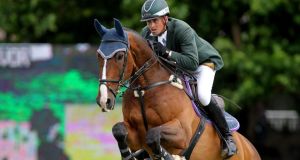 Trevor Breen in action in 2010. He helped Ireland to victory at Hickstead on Sunday. File photograph: James Crombie/Inpho

The Irish senior showjumping team won the Longines FEI Nations’ Cup of Britain at Hickstead on Sunday with the result, which followed a jump-off, moving Ireland up to third place on the league table and, in the process, guaranteeing the team a place in the final in Barcelona.

Ireland were level with Britain at the halfway stage on eight faults. Tipperary’s Trevor Breen looked to be heading for a clear round with Bombay when first to jump, before the last fence fell to leave him with four faults. Kilkenny’s Richie Moloney jumped a perfect clear with Freestyle De Muse, while Galway’s Michael Duffy (EFS Top Contender) and Waterford’s Anthony Condon (SFS Aristio) both finished with a fence down apiece.

Duffy then delivered a vital clear which guaranteed Rodrigo Pessoa’s team at least a jump-off. Condon could win it with a clear when last to go, but he had an early rail down and knowing he could not improve Ireland’s 16 fault total, he decided to retire and save his horse for the jump-off to follow.

Holly Smith was selected to go against the clock for Britain with Hearts Destiny and put down a tough target when jumping clear in 43.39 seconds. Condon set off at a good pace with the John Hales-owned Aristio and was in touch midway through the round. Aristio, a long-striding son of Arko, made up ground down to the last with Condon coming home clear in 41.29 seconds to claim victory.

Exeter coach Baxter calls for an end to mass Covid-19 testing in rugby 16:01
Colin Keane has Shane Foley in his sights as they head for Cork 15:52
Dermot Weld’s Tarnawa won’t be aimed at the Arc 15:47
All Blacks facing a Christmas in quarantine 15:33
World champions South Africa could miss Rugby Championship 15:27
Here is your handy guide to sport on television this week