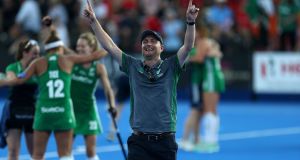 What happens when after being crushed you dare to believe in yourself and those around you?

Ireland gathered the remnants of spirit and confidence from the ashes of their failed qualification run for the 2016 Rio Olympics and have built them into the most enchanting two weeks in Irish hockey history.

Never before has a women’s team risen above their station, disrespected theirs and everybody else’s world ranking and expectations to pluck a World Cup semi-final from London’s Olympic Stadium and modestly place themselves among the aristocrats of the world game.

In that impossible fairytale lies the magic. It is the allure of the unforeseen unfolding, the simple fable of what is deserving coming to you. A small sport on a grand stage among bigger nations; a school teacher, a few students and lawyers showing how meagre means, if the will and sacrifice is there, are no barrier to success.

Ireland have hit some historic landmarks before but this run by coach, Graham Shaw, and his 18 players eclipses all. The Irish men’s team qualified to play in the Rio Olympics for the first time in their history, the first Irish team of any kind to qualify for an Olympics since 1948.

The men also beat the fifth-ranked team in the world, England, in 2015 to win a bronze medal at the European Championships, another first for the sport.

Going further back in time, other Irish teams have been to European U-21 finals, European U-18 and U-16 finals but, in Irish hockey, women’s teams have never been able to successfully punch through to podium positions at World or Olympic level.

They have always been afforded a wary respect by other nations. Overachieving against higher-ranked teams in plucky one-off matches was in a way a curse, a tantalising glimpse of where they thought they could be. That history has been rewritten.

For the players that is less a surprise than it is for others. Former camogie player and captain Katie Mullan said it before London, that her team is more bite than bark.

“It may seem that we are aiming high,” she said one month before the tournament. “But I think it’s realistic.”

Ireland’s pedigree for lasting tournaments, a tiring mix of mundane hotel life and high-pressure matches, had never been proven until now by a squad with no real standout super stars in a World Cup, a competition more difficult to navigate than an Olympic Games.

Theirs is a tightly-knit group of like-minded warriors because, as an international player, that edge was a quality that Shaw always brought to a game. It is no coincidence he has invested that characteristic into this team.

But, no matter what happens from here, the Irish women have won something more than the sum of a World Cup pool and a quarter-final. They have won respect and appreciation and not the patronising kind.

Like Annalise Murphy or Katie Taylor they are a modern breed of Irish athlete with no fear of dreaming big and the intelligence to value the binding integrity of being small. Local going global. The World Cup semi-final. Our enchantment continues.