Johnny Watterson profiles the 18 hockey players and their coach Ireland’s Yvonne O’Byrne turns away from Jo Hunter of England during the Pool B game. Photograph: Christopher Lee/Getty Images 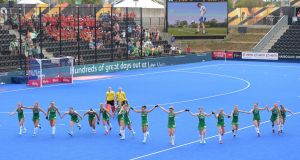 Ireland’s players celebrate after beating India in the pool stages of the Women’s World Cup in London. Photograph: Joe Toth/Inpho

Ireland's women's hockey edged out India 3-1 in a shootout on Thursday which gave them a World Cup semi-final spot.

Graham Shaw's side have made history by making it to this stage of the competition. But who are Ireland's hockey heroes?

Position: Goalkeeper
Club: University of Louisville
Age: 22 Caps: 76
Occupation: Student
First-choice net minder. Started all three games so far. From Larne she became the youngest goalkeeper to play for Ireland against Spain in 2014, a day after her 18th birthday. A great shot-stopper, particularly in shootouts. Playing since she was nine-years-old.

Position: Goalkeeper
Club: Railway Union
Age: 29 Caps: 34
Occupation: Doctor
The Royal College of Surgeons graduate was pivotal in South Africa during Ireland’s qualification for this World Cup. With McFerran in the sin-bin in the World League semi-finals, O’Flanagan saved a penalty with her first touch against India. Schooled in Loreto Foxrock.

Position: Defence/Midfield
Club: Pegasus
Age: 30 Caps: 270
Occupation: Ulster Hockey Development Officer
The most capped female in Irish sport and in her 11th year as an international player. Part of the team that narrowly missed out on Olympic qualification for 2012 and Rio 2016, the Omagh player will retire after London. Watch for the long pass from defence.

Position: Defence
Club: Belfast Harlequins
Age: 21 Caps: 76
Occupation: Student
Came from the Syracuse University in New York and played for Harvestehuder in Germany for a year. A captain of the Irish Under-18s, she cemented her current position in 2016. Scored the winner in the Ulster Schools Senior Cup for Ballyclare HS at 14-years-old.

Position: Defence/Midfield
Club: Cork Harlequins
Age: 24 Caps: 43
Occupation: Postgraduate Student
A relative newcomer, the Limerick player made her debut in 2016 after a hip injury and stress fracture delayed progress. She then nailed down roles in midfield and defence. Another who went through the US college system, winning two NCAA titles with UConn Huskies.

Position: Defence
Club: UCD
Age: 20 Caps: 71
Occupation: Student
The dual international made her debut in cricket at 13-years-old and won 40 caps in T20 and ODIs before focusing on hockey. She was precocious there too, debuting for Ireland two weeks before her 18th birthday in 2016. An ever-present on the team since.

Position: Defence
Club: Cork Harlequins
Age: 26 Caps: 116
Occupation: Postgraduate Student
Hugely consistent performer, she has played over 30 consecutive internationals matches since June of last year. The Cork player made her debut in 2016 having played on the Mount Mercy senior schools team as a 14-year-old. Hobbies include tag rugby and soccer.

Position: Midfield/Defence
Club: Mannheimer, Germany
Age: 27 Caps: 131
Occupation: Hockey Player/Student
The former captain came through a complicated cruciate knee injury to make the squad. A key player for Shaw and one of the most talented players Ireland has produced. Played for Ireland while still as school in Derry and was voted best player at University of Maryland.

Position: Midfield
Club: Pembroke
Age: 26 Caps: 140
Occupation: Business and law graduate/coach
A deceptively quick player who has the ability and confidence to breeze past opponents. A veteran of the Rio Olympic campaign, she along with Chloe Watkins were central to St Andrew’s College winning the All-Ireland title in 2010. A graduate of UCD and Syracuse.

Position: Midfield
Club: Bloemendaal, Netherlands
Age: 26 Caps: 197
Occupation: Hockey player/student
If Ireland do the unthinkable and reach the final, she will earn her 200th Irish cap. Brother Gareth and father Gordon were both capped. Monkstown born and now with Dutch side Bloemendaal, where she is coached by twice Olympic champion Teun de Nooijer.

Position: Midfield
Club: Belfast Harlequins
Age: 28 Caps: 163
Occupation: Lawyer
A corporate lawyer in Belfast, she has come back from 18 months out with a cruciate knee injury in 2013. A tough, robust midfielder, she regained her spot in 2015. Her goal against India last summer earned Ireland their World Cup place. Another capped as a schoolgirl.

Position: Midfield
Club: Loreto
Age: 27 Caps: 117
Occupation: Coaching/S&C
An intelligent, tidy operator, who came from Dublin’s Corinthians HC, she can float between midfield and defence. Made her debut at 22 against India and was part of the group from the Rio qualifying campaign group who have clearly bounced back this year.

Position: Forward
Club: UHC Hamburg
Age: 28 Caps: 166
Occupation: Lawyer
The lawyer has taken a year out to play with UHC Hamburg in Germany, where she will return to work and play after London. A great athlete and high work rate makes her an always busy player in the forward line and leading the press. Has 36 goals.

Position: Forward/midfield
Club: UCD
Age: 24 Caps: 154
Occupation: Postgraduate Student
She successfully took over the captaincy after Frazer’s injuries kept her out of the team. Natural aggression and a strong competitive streak, the former camogie player with Coleraine’s Eoghan Rua is now studying for a Masters in biomechanical engineering in UCD.

Position: Forward
Club: Pinoké, Netherlands
Age: 28 Caps: 171
Occupation: Lawyer
After her winning deflection against India she is on 64 goals and one of Ireland’s most prolific scorers with almost a goal every three games. Running out on defensive corners, where she takes the ‘body line’ on the drag flick has been as brave as it is effective in Ireland’s progress.

Position: Forward
Club: UCD
Age: 26 Caps: 106
Occupation: Lawyer
The UCD captain was out with a shoulder injury in 2017. Prior to that she played with the Huskies in Boston before leading UCD to Irish Cup and league success in recent seasons. A quality athlete, she also played with the Irish soccer and Dublin underage teams.

The Irish coach grew up on hockey, GAA and soccer. He played alongside childhood friend Damien Duff at Lourdes Celtic and Dublin’s Collie Moran before concentrating on hockey. In 2010 he famously coached Loreto to the Irish Senior Cup title and won the men’s title playing with Glenanne the same day. Has 151 Irish caps.