Deontay Wilder and Tyson Fury were both eager to call for a rematch after a thrilling split decision draw at the Staples Centre in Los Angeles on Saturday (December 1). 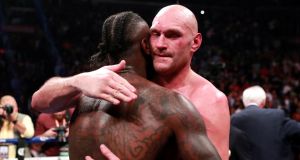 On a night full of surprises, Tyson Fury saved the biggest curveball for after the final bell.

The 30-year-old from Manchester was hardly alone in believing he had done enough to outpoint Deontay Wilder in Saturday night’s heavyweight title fight in Los Angeles.

Yet rather than linger on the result, Fury was impossibly gracious in the immediate aftermath and nothing short of effervescent when he arrived at the post-fight press conference in the bowels of the Staples Center: thanking Wilder, thanking the TV networks, thanking America. Everybody but the beer vendors on the mezzanine.

“I enjoyed every second of it,” he said.

“I’m not going to sit here and complain all night and scream robbery. I thought I won the fight, I’ll leave the audience to decide what they thought. But listen: two men tried their hardest, tried our guts out, trained for 10 weeks, away from their families.”

If you consider Fury’s journey after a 31-month lay-off, the largesse and wider perspective was understandable. He admitted that he was never able to enjoy the moment when he ended Wladimir Klitschko’s decade-long title reign in 2015. The drugs ban and very public bout with mental health issues that hastened his spiral into a despair that led him, as he told it on Saturday, to the brink of suicide.

“If you look back at about a year ago today, I was about 400lbs,” he said. “I was in terrible shape. It’s no secret what I’ve been through. But it’s proof anyone can come back from anything. Anyone can do it. I ain’t a special human being. I’m just a normal man. But with the right help and the right guidance, anyone can turn their life around.”

Fury’s coach Ben Davison was content to play the bad cop during the session, adding: “Everybody should be thankful to Tyson for being so professional in his conduct when we all know sitting in this room who won that fight. He also could have caused a riot if he’d kicked up about that scorecard.”

Fury agreed, far less ominously: “There was about 10,000 Travellers and Brits come from around the world. They probably would have smashed up the ring if I’d have instigated it.”

Now it seems a rematch between Fury and Wilder will be the priority over a fight between either and Anthony Joshua, who holds the WBA, WBO and IBF belts.

“At the end of the night that’s going to be down to Tyson,” said Frank Warren, who promotes Fury. “From my perspective I’d love the rematch. I’d like to see it in the UK, fill a football stadium up. We’d fill up Wembley, Arsenal, any of those big stadiums.”

Shelly Finkel, who advises Wilder, concurred: “I believe the fight right now with Fury is a stronger fight and probably more logical to happen.”

Yet for Fury that was business for another day.

He is heading back home for Christmas with the family before he will “recalculate” in January, but not before he steers Saturday’s session into one last detour into the surreal: an all-hands sing-along of Don McLean’s American Pie .

“There’s no losers here tonight,” Fury said. “Me and Deontay had a lot to lose. Ten years each. We both had 10 years unbeaten as professionals. We both had pride and respect and belts and everything. But it was what it was. No one lost their zeroes.”