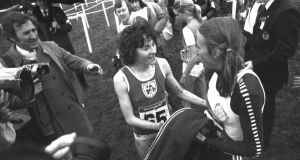 It’s both typical and telling of Mary Purcell that she’s thinking back to her pioneering years of Irish women’s distance running – a shining light from 800 metres to the marathon – and wondering what might have been. It must be the same insatiable desire that set her apart to begin with.

Plenty of Irish women have run faster, won more medals too, only Purcell showed them the way, our first world-class distance runner on a par with the Irish men. Nothing seemed impossible, even when women’s distance running was still anything but fashionable – and when Purcell was also working as a full-time pharmacist and rearing a family.

“Yes, I’m one of those people who look back at the things I didn’t do,” she says. “That’s just my personality, I always wanted to do better, be better.

“And I never really thought about what I was achieving. People might say ‘you’re great to be doing this’, but you still had to go home and cook the dinner, go to work the next day, getting on with the business of making a living.”

Over her 12-year career she ran in two Olympics (Munich 1972 and Montreal 1976) plus two European Championships, five World Cross Country championships, and won 13 Irish titles – nine on the track, three on the country, one on the road, plus three British titles; she also broke 12 Irish records, made 20 international appearances, and went unbeaten in Ireland from 1972 to 1976.

In the end she only has one major championship medal to show for her efforts – a European Indoor bronze over 1,500m from 1980 – only don’t start her talking about all the medals won during her time by East Germany and the rest of the Eastern Bloc.

“Being a pharmacist, I’d a better feel for what was going on. And to me, the drug taking was becoming more obvious. I could have gone to Moscow in 1980, but at that stage I was getting a little disillusioned. I remember walking behind some of the Russian sprinters, and you know physiological things happen when you’re on certain substances. Men become more like women, and women become more like men, the deepening of the voice, the elongation of the face, loads of little tell-tale signs.”

She’s still running now – a year shy of her 70th birthday – her achievements recognised today as she becomes the latest inductee into the Hall of Fame at the Athletics Ireland awards. What also set Purcell apart was her willingness to try anything which might help get more out of herself: altitude training at St Moritz when that was still a novelty; later running 130 miles a week, including 30 mile runs over the Dublin Mountains; racing against men when that definitely wasn’t cool.

“And the first to run without a bra,” she says with a little laugh. “Now that was revolutionary. Because back in those days the women’s running singlet was awful, came up around the neck. I met this runner from Israel, and she had this gorgeous singlet, which I tried. I always hated wearing a bra, just wanted to feel the most free. Because that’s the thing I enjoyed most about running, just going out and feeling the freedom, that feeling that you are flying.”

Growing up around Inchicore and Dolphin’s Barn, in those days, life was a little tougher. So you had to be fast on your feet, if you know what I mean. Just in case

She made her breakthrough as Mary Tracey, aged 21 already with no athletics background, but a former hockey player already into her pharmacy studies at UCD. Irish athletics already had women pioneers – Maeve Kyle in the sprints, Peggy Mullins, the first national women’s cross country champion in 1966, and Claire Walsh, 800m finalist at the European Championships in 1971, but no Irish woman approached distance running with the same level of intensity and obsession.

“One never knows where then genes come from,” she says. “Growing up around Inchicore and Dolphin’s Barn, in those days, life was a little tougher. So you had to be fast on your feet, if you know what I mean. Just in case. That’s just the way things were.

“I remember watching the 1968 Olympics on the TV, and thinking ‘ah, well that’s too late for me now’, because then I went to college and studied pharmacy. With myself, with the hockey, one match didn’t go well, and they decided to drop people en masse. I was just looking around and happened to bump into Peter Purcell, and he suggested I try athletics. He became my coach, then my husband, and that’s how it started.”

I was working at LEO Laboratories in Crumlin, and everyone gave 10p per pay check to help fund me, go to London to train and race at Crystal Palace. They were amazingly generous to me.

Purcell was part of the old Guinness Athletics Club, which she promptly joined, and quickly turned heads. In her first proper season, 1972, she ran 2:04.2 for 800m and with that found herself Munich-bound. Not progressing beyond the heats simply whetted the appetite for me.

“In the ideal world it would have been nice to go to the US on scholarship, but because I already had a primary degree, that wasn’t going to happen. I spent a few seasons flying over the States for indoors, and that went quite well. Eamonn Coghlan was the big character them, a real crowd-pleaser. The lads were being paid money at that time, but the women weren’t. I’d come home, go back to work, life goes on.”

Women’s sport was also a long way off being funded: “I was working at LEO Laboratories in Crumlin, and everyone gave 10p per pay check to help fund me, go to London to train and race at Crystal Palace. They were amazingly generous to me.”

She ran an Irish 1,500m record and best of 4:08.63 in Montreal, fifth in her heat, again not good enough to progress against increasingly dominant Russians and East Germans: “I just said to myself, ‘what the hell is going on here?’ It just knocked the stuffing out of me, because you just knew. There was little testing, and the testing is only as good as the analytic methods you use.”

Still she broke new ground – enjoying her own Kathy Switzer moment (the American woman who organisers attempted to push off the Boston Marathon course in 1967). “It’s very hard when you’re running against yourself the whole time, so they were running a men’s 5,000m at Belfield one time, and I decided I’d go as far as 3,000m. Some of the lads objected, probably because they’d get very upset if they were beaten by a woman. I remember Louis Vandendries from the Crusaders club reading some official statement that if I ran I could be banned, blah blah . . . We all said fine, and off I ran. But they never recorded the time (8:51.4) because it wasn’t official, but I was trying to maximise my potential.”

Purcell wasn’t afraid to test herself off the track either, “even though I hated cross country”, finishing sixth in the 1979 World Cross Championships in Limerick, behind winner Grete Waitz, upstaged only by John Treacy’s win in the senior men’s race.

After Moscow she gave birth to her second daughter, and working full-time in her own pharmacy business, moved briefly up to the marathon, winning the Irish title in 1982, and the Dublin marathon in 1983. Home since 1993 has been Douglas, on the Isle of Man, where she continues to run SEQ, a regulatory affairs consultancy for the pharmacy industry.

“I’d a slight problem with sciatica in my back, but I don’t have any joint issues, hip or knee, or anything like that. I’m still running now, and my daughter has persuaded me to start competing again.The most pleasing thing is to see where women’s sport is now, how many women are running these days. In those days it was hit and miss, particularly for women. One criticism I would have of myself is that I probably over-trained, but that’s the nature of the beast, I hated to fail.”

Hero of the Munich air disaster Harry Gregg dies aged 87 07:42
Wins for Wexford, Cork and Clare; Ireland to name updated squad for England trip 07:20
Dublin overcome the elements and Carlow 06:00
Tipping Point: Eddie Jones’s rhetoric is out of place in a febrile political climate 06:00
Leinster let their feet do the talking as they make it 17 wins on the trot 06:00
Here is your handy guide to sport on television this week