Ireland start their campaign against defending champions Australia on Friday 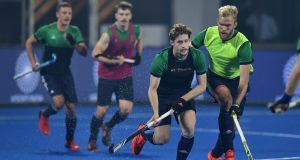 The Ireland players take part in a training session ahead at Kalinga Stadium on Tuesday. Photograph: Charles McQuillan/Getty Images

It is no harm that the success of the Irish women’s hockey team has followed the men’s team to India. Ireland tip off in the first match of the 2018 World Cup on Friday, their first world appearance since the Gaddafi Stadium, Lahore in 1990, all of 28 years ago.

London and the summer magic of a women’s World Cup final just gone sets hockey on a higher trajectory than it has been on since the Rio Olympics in 2016.

The men have respectfully doffed their caps to the women’s historical, standout performance. But rather than see a silver medal as an impossible goal, the Irish team face Australia in Kalinga Stadium on Friday (11.30am Irish time), Bhubaneswar as hopeful as the women were when they travelled to Olympic Park in London’s east end.

The caveats, however, remain the same.

In Australia Ireland meet a team looking for a record third World Cup win in succession. The number one team in the world have been in the last four finals stretching back to Kuala Lumpur in 2002, although at the Olympics they were beaten by New Zealand at the quarter-final stage in Rio 2016 and missed out on the medals.

Ireland, ranked 10th in the world, are also adapting to a change of coach last summer when coach Craig Fulton left to become an assistant in the Belgian national squad.

A similar episode occurred before the 1987 European Championships in Moscow, when Irish coach Ray Cantan abruptly departed and Dutchman Cees Koppelaar came in at short notice.

Depending on the cross-over matches there is a possibility Fulton could face his Irish side six months after jumping ship.

Alexander Cox is now in charge of a squad that is scattered around European clubs. Five players are in Belgium, three in Germany others are in Holland and India with just seven based in Ireland at Monkstown, Three Rock Rovers, Lisnagarvey and Banbridge. Consequently Irish training sessions took place in the Netherlands before the team travelled to India.

There are a couple of players to watch throughout Ireland’s three Pool B matches. Shane O’Donoghue, originally from Dublin’s Glenanne and now with KHC Dragons in Belgium, is currently on a 92 international goals, one short of the record held by Cork’s John Jermyn. Banbridge player Eugene Magee has the most caps of any Irish hockey player with 274 after Ireland’s recent test match defeat against the Netherlands. It moves him ahead of World Cup silver medallist Shirley McCay.

In all, the 16 participating teams have been divided into four groups of four with each team playing each other team in its group once. The first-place teams in each pool advance directly to the quarter-finals, while the second and third-placed teams in each pool enter into the cross-over matches. From there, a single-elimination tournament will be played.

Realistically Ireland will be targeting the second or third place in the pool. China are ranked below Ireland at 17th with England above us at seventh in the world. Both of those matches are winnable.

In Ireland’s final pool game Paul Gleghorne is again likely to face his brother Mark, who plays with England and Great Britain. It is not the first time the pair will or have met each other at international level.

Ireland beat England in the last must-win game they played in 2015, when England were ranked fifth in the world and Ireland stunned them 4-2 to win a first ever European Championship bronze medal.

Ireland’s fitness and conditioning will be as good as any. But how Cox shapes the team and what influence he can impart in such a short time is a big unknown. For such a defining tournament, that is unfortunate.