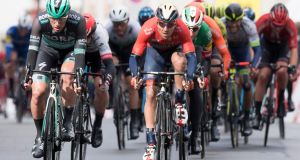 Sam Bennett sprints for the second place in front of third-placed Sonny Colbrelli during the second stage of the 73th Tour de Romandie. Photograph: Laurent Gillieron/EPA

Sam Bennett went agonisingly close to continuing a remarkable sequence in stage races this year, netting second on stage two of the Tour de Romandie in Switzerland. The Carrick-on-Suir rider was clearly quickest of the sprinters at the finish in Morges, but had to be content with the runner-up slot. Swiss rider Stefan Küng had jumped clear of a breakaway group and had too much of an advantage to be hauled back.

Küng hit the line 59 seconds ahead of Bennett, who finished well clear of the next-best sprinter, Sonny Colbrelli (Bahrain-Merida). Bennett has taken at least one victory in each of the stage races he has contested this year, namely the Vuelta a San Juan, the UAE Tour, Paris-Nice and the Presidential Tour of Turkey.

“That was a tough day in the saddle today. It was raining all day long and we knew that it will be difficult to close the gap due to the wet roads,” he said. “But congrats to Küng, he rode a smart race. I gave my best to win the sprint out of the bunch and I am satisfied that it worked out.”

With the two remaining road stages lumpier in profile, Bennett is pessimistic about keeping his sequence going. “That was more or less the only chance for the sprinters here at the Tour de Romandie,” he said, “but I will support my team-mates in the upcoming stages”.

Bennett is a better climber than most sprinters, though, and so he is likely to try to remain with the front riders on Friday’s stage to Romont.

Also competing are Nicolas Roche (Team Sunweb) and Ryan Mullen (Trek-Segafredo). Roche finished in Bennett’s group on Thursday, and showed strong form earlier in the race when he was a fine 15th in the prologue. That was his best result thus far this season, suggesting that his form is picking up. He is best of the Irish in 41st overall, four minutes and 52 seconds behind the overall leader Primoz Roglic (Team Jumbo-Visma).

In other news, many in Irish cycling gathered last Saturday to pay respects to Frank Gibson, a long-serving race official who did much for the sport. Gibson was an important volunteer at the Rás Tailteann and many other events, operating the photo finish camera which lent precision to the calculation of results. He showed great passion for cycling and was also among the friendliest of officials. He will be missed by many.