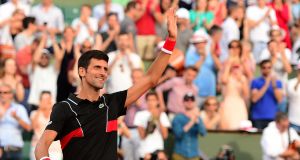 Novak Djokovic eased into the quarter-finals of the French Open in straight sets against Fernando Verdasco.

The 2016 Paris champion is still not at his dynamic best following a long absence due to an elbow problem, but he did not have to be to get past the 30th seed.

Djokovic took the first set, a slugfest of deuces which lasted almost an hour, with a solitary break of serve.

He repeated the trick in the second, taking eight points in a row on the way, but not without complaining to the umpire about the slippery court.

Meanwhile, Verdasco had slipped off a trainer to reveal toes heavily covered in plasters while receiving treatment for a blister on the sole of his foot.

The Spaniard grimaced his way through the third set as Djokovic broke twice to run out 6-3 6-4 6-2 winner.

Alexander Zverev has become marathon man of Roland Garros after coming through another five-setter to book his place in the quarter-final.

The 21-year-old German, seen along with Djokovic as one of the few obstacles to Rafael Nadal claiming an 11th title, was 2-1 down in sets for the third straight match, this time against Karen Khachanov.

Despite his lofty seeding this is the first time Zverev had reached the last eight of a grand slam.

He has now played 18 sets to Nadal’s nine, with the Spaniard facing unseeded German Max Marterer on Monday in his fourth-round tie.

But Zverev insists he is more than happy to keep going the distance.

He said: “It’s about trying to find a way and trying to win. That’s what I am able to do in the last few matches, and I’m very happy about that.

“I’m very happy about being in the quarter-finals here going the hard way, going the long distance every single time and, you know, showing myself, showing everybody that I can play for as long as I need to.

“I’m in the quarter-finals of a grand slam. If you’re mentally fatigued, then something is wrong with you”

Zverev’s opponent in the last eight will be Austrian seventh seed Dominic Thiem, who overcame Kei Nishikori of Japan.

Nishikori, the 19th seed, had hauled himself back into the match by snatching the third set 7-5, but threw his racket to the floor after he was broken for 4-3 in the fourth.