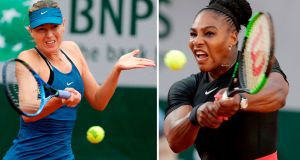 Maria Sharapova and Serena Williams face each other in the fourth round of the French Open. Photograph: Thomas Samson/AFP/Getty Images

It will be Serena Williams versus Maria Sharapova at a Grand Slam tournament, but don’t think that today’s meeting at Roland Garros will be business as usual. Despite playing little competitive tennis in the last 16 months, Williams may well win again. Just as she has won her last 18 matches against Sharapova, the only women’s player in this era who has rivaled Williams’s star power and earning power, yet has never rivaled her as a champion.

But Williams and Sharapova’s lives and perspectives are altered now, and both have something different to prove as they prepare for this fourth-round French Open duel and all that might happen beyond it – for the winner – in Paris this spring.

Williams, who defeated 11th-seeded Julia Görges 6-3, 6-4 on Saturday in the finest performance of her comeback from maternity leave, wants to show herself and anyone else concerned that she can resume being the game’s dominant force as a 36-year-old who gave birth to a daughter, Olympia, just nine months ago.

Sharapova, a two-time French Open champion who routed sixth-seeded Karolina Pliskova 6-2, 6-1 on Saturday, wants to make it unmistakably clear that she can be every bit as good as she was before a 15-month suspension for a doping violation that began in early 2016.

Without such meaty challenges, it is possible that both would be retired by now. Sharapova, though only 31, has been playing on tour since she was 14 and training in a professional manner since she was a preteenager fighting for her place in the sun at the IMG Tennis Academy in Bradenton, Florida, as her father, Yuri, a Russian immigrant, struggled to make the finances work.

But Williams and Sharapova’s ambitions and story lines are about to collide again on Monday in the midst of a women’s competition that is far more compelling than the men’s event here. With Williams and Sharapova back in the mix in Paris, finding sufficiently grand venues to showcase all the leading women proved challenging in the third round Saturday. The world number one, Simona Halep, a two-time French Open finalist, had to trek all the way out to the new Court 18 in the hinterlands of Roland Garros to face Andrea Petkovic.

Halep prevailed 7-5, 6-0. Sloane Stephens, the reigning US Open champion, also played on Court 18 for her three-set tussle earlier in the day with Camila Giorgi, an Italian who has rarely met a risky shot she was not willing to embrace. Giorgi served twice for the match in the third set – at 5-4 and again at 6-5 – before Stephens defused the danger. “She plays kind of crazy, but in a good way,” the 10th-seeded Stephens said.

“I knew it was going to be a battle, and I just stuck in there and waited for my opportunities.” Angelique Kerber, a former number one and a two-time Grand Slam champion, ended up on Court 1 against Kiki Bertens, a major clay-court threat and a French Open semi-finalist two years ago. Kerber won 7-6 (4), 7-6 (4). “I think for me watching some men’s tennis right now, it’s like you know who’s going to win,” said Wim Fissette, Kerber’s coach.

“A lot of these men’s matches, it seems very clear, but the women’s game, it’s a very exciting period. You cannot tell who’s going to win, and you have all these generations coming together.”

The women’s fourth round in the top half of the draw is now set. It will be Halep against Elise Mertens; Kerber against Caroline Garcia, the last French player left in singles; Garbiñe Muguruza, the 2016 French Open champion, who looks like a woman on a mission, against Lesia Tsurenko; and finally Williams against Sharapova.

That match will be the latest chapter in a would-be rivalry that has never materialised but has seldom lacked a sharp edge. Sharapova wrote about Williams at length in her recent autobiography, Unstoppable, an intriguing title in light of how many times Williams has stopped her through the years.

In Sharapova’s view, she has never been forgiven for witnessing Williams’s tears in the locker room of the All England Club after Sharapova, then just 17, upset her in the 2004 Wimbledon final. “I think Serena hated me for being the skinny kid who beat her, against all odds, at Wimbledon,” Sharapova wrote.

Williams was asked about that analysis Saturday night. “I don’t have any negative feelings toward her, which was a little disappointing to see in that hearsay book,” she said. “Especially having a daughter, I feel like negativity is taught. One of the things I always say: I feel like women, especially, should bring each other up.”

Williams also discussed the locker-room incident. “It’s a Wimbledon final, you know, so it’s just, like, I think it would be more shocking if I wasn’t in tears,” she said. “And I am emotional, and I do have emotions, and I wear them on my sleeve. You know, I’m human, so for me, I think it’s totally normal. I think what happens there should definitely maybe stay there and not necessarily talk about it in a not-so-positive way in a book.”

Bring on the fourth round, which will be Sharapova and Williams’s first match since Williams won in the quarter-finals of the 2016 Australian Open, the last tournament Sharapova played before her suspension for using the banned substance meldonium.

“Well, it’s been awhile,” she said of her latest chance to face Williams. “And I think a lot has happened in our lives for the both of us in very different ways.” Sharapova also said: “I think any time you play against Serena you know what you’re up against. You know the challenge that is upon you. You know, despite the record that I have against her, I always look forward to coming out on the court and competing against the best player.”

Williams is actually unseeded, but both she and Sharapova, the number 28 seed, are clearly gathering momentum in Paris. Sharapova, a former number one who worked her way back into the top 30 after returning to the tour in April 2017, was relentless against Pliskova, mixing baseline bolts with deft drop shots. Williams was settled and routinely on target against Görges, a big-serving German who hit 11 aces to Williams’s three but who could never get the lead on the scoreboard, struggling to cope with Williams’s pace and precision.

Williams’s win was quite a performance, all the more so for someone who had not played a clay-court tournament in nearly two years before arriving at Roland Garros. “Well,” said Alexis Ohanian, her husband. “She’s always been a trendsetter.”

United slip up in top four race; reasons to be cheerful for Munster 07:00
Solskjær says Man United did not deserve to beat Southampton 06:36
Gerry Thornley: Munster will make for interesting case study when rugby resumes 06:30
James McClean says he gets no support for abuse he receives 06:34
Different Strokes: Day looks in the mirror and sees the light 06:00
Here is your handy guide to sport on television this week