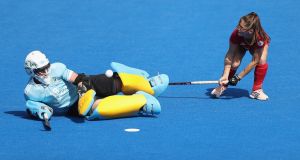 Justine Sowry, coach of the University of Louisville hockey team, had a look at Ireland’s World Cup draw and reckoned Ayeisha McFerran would be ready to return to college come Wednesday of this week. So that’s when her goalkeeper booked her flight back to Kentucky.

“She thought we’d be out by the crossovers, so she was like, ‘come back by the eighth, you’ll have had plenty of rest’,” McFerran recalls.

It’s not that Sowry was being disrespectful about Ireland’s prospects. No more than anyone else who looked at that draw, the very best that could have been hoped for was a second-place finish in the pool behind overwhelming favourites England, a crossover game on July 31th, at which point Ireland’s interest in the tournament would, surely, end.

But then McFerran, goalkeeper of the tournament, and her team-mates turned the hockey world on its head and reached the final.

“She came over to watch me and said to me afterwards, ‘right, I think you need a few more days off’, so I changed my flight to next Saturday.”

And the 22-year-old, back home in Larne this week, needs all the breathing space she can muster.

“It’s literally been non-stop. Since after the quarter-final we’ve barely had a chance to stop and think about what we’ve done, and we’ve been doing so much media since we got home too. But we’ve loved every single moment of it, the homecoming in Dublin was just magical, we couldn’t believe the number of people who were there. The support has been amazing.

“There were so many memorable moments for us in London, endless highs, but the one that stands out for me was in the final when the stadium announcer asked ‘who’s here for Holland?’, and there were a few cheers. And then ‘who’s here for Ireland?’ and the whole place erupted, the roar, the excitement, it was unbelievable. I’ll never forget it. It’s giving me goosebumps even thinking about it now.”

I’m going to enjoy everything that I do. Because that’s what she [her mother] would have wanted

Her father, George, was in the crowd too for the big day, along with her sister Tamara, former teachers from Larne Grammar School, lots of friends and former club-mates from Randalstown and Pegasus. Her Dad had, at first, been unable to get time off work.

“He watched the shoot-out against Spain on his phone during a break,” she says. “But once we made the final his boss told him to get to London. So, he was able to come over and he got a ticket at the last minute, in the fan zone, it was brilliant to have him there.”

Absent, but at the very centre of her thoughts, was her late mother Sandra who died when McFerran was just 15. There was much talk during those moments of high drama at the tournament, especially during the shoot-outs against India and Spain, about how a smiling McFerran was revelling in it all, rather than being overcome by the magnitude of the occasion.

She credits her mother with that outlook on not just sport, but on her life as a whole.

“My Mum always really encouraged me to give my all in everything I did, and to enjoy every moment. Her life was cut so short, she had so much left to give to me and my siblings and everyone who knew her, so my attitude is that I’m not going to waste any opportunity I ever have.

And it was her mother who first took her to Irish dancing when she was a child, partly in the hope that it would result in her daughter expending some her ceaseless supply of energy.

“My granddad used to sing in shows when I was younger, I would sit and watch videos of him, and then these girls would come out and do Irish dancing and I would try and copy them. I was a crazy kid when I was younger, I had so much energy, so my Mum said ‘come on, try Irish dancing!’ So she took me to the local dancing school in Larne – and I loved it. I kept it up for 11 or 12 years. I took it really seriously too, I competed all around the country.”

Did you have ringlets?

“I did – for one competition. Most of the time I wore my hair straight, but it was the Ulster finals and I decided to curl my hair, but when I got to the competition all the other girls had theirs straight. I definitely stood out,” she laughs.

You could have been in Riverdance instead of the World Cup?

And Irish dancing, she reckons, helped with that nifty footwork we saw on display in London, particularly during the shoot-outs.

“It probably did,” she laughs. “I have quick feet, and I’m always, literally, on my toes, so I think a lot of that would have come from the dancing. But I played every sport under the sun when I was younger and I think that helps a lot too, especially with learning about your motor skills.

“And that’s how you learn to pick out what you most enjoy, for me it was between athletics, soccer, Irish dancing and hockey, and I think they all helped me improve in each. In the end, though, I focused on hockey – and it’s being going okay so far.”

It’s being going a little more than okay, both on the international front and with the University of Louisville.

Last December McFerran was picked, for the second year running, by the National Field Hockey Coaches Association for their ‘All-American’ team of the year, the highest honour in US college sport.

She has just one year left at Louisville, where she went on a hockey scholarship in 2015, majoring in Health and Human performance, but she is already giving some thought to the future.

“I have to, really, because I need to start thinking about what I’ll do next year, so I’ll look at clubs and see what options there are for me, maybe think about playing abroad [in one of the major European leagues] if that was possible. But right now I’ll enjoy the moment and enjoy my season with the girls in America, I love being with them.”

Beyond that? Qualification for the 2020 Olympic Games would be good.

“That’s the dream, and I hope we’ve made it a bigger possibility by what we did in London. And I think that’s the most important thing we’ve done, kind of putting Irish hockey on the map and, hopefully, helping make hockey in Ireland even bigger than it is.”

Previous Sportswoman of the Month winners (awards run from December 2017 to November 2018, inclusive):

December: Fiona McHale (Gaelic football). McHale was the driving force behind Carnacon’s victory over Mourneabbey in the All Ireland Club final, their first title since 2013. The Mayo midfielder earned the Player of the Match award for her tireless performance in a 0-15 to 1-10 win at Parnell Park, having also shone in the Connacht club final and All-Ireland semi-final.

January: Phil Healy (Athletics). The Cork woman had an encouraging start to the indoor season when she knocked over a second off her 400m personal best at a meeting in Vienna, and she maintained her excellent form through the summer, improving her 200m and 400m outdoor personal bests, having already set a new Irish record in the 100m.

February: Cora Staunton (Australian Rules). Staunton made such an impression in her first season with the Greater Western Sydney Giants, when they just missed out on a place in the Grand Final, that the club has signed her up for a second campaign. The 36-year-old’s 24th Championship campaign for Mayo, though, ended prematurely when she was among a group of 10 players to leave the panel in a dispute over “player welfare” issues.

March: Katie Walsh (Horse racing). Walsh won’t forget in a hurry the six week spell she had from March 14 – first she rode her third Cheltenham winner, then she was one of just 12 finishers in the Aintree Grand National, then, in April, she rode another winner at Punchestown – after which she announced her retirement following an outstanding career.

April: Leona Maguire (Golf). The 23-year-old from Cavan closed out her spectacular amateur career on a high, winning the Atlantic Coast Conference Championship for a record-equalling third time and finishing her time with Duke University with the best scoring average (70.93) in Division I women’s golf history. She made a promising professional debut at the ShopRite LPGA Classic in New Jersey where she finished eight under, tying for 15th.

May: Natalya Coyle (Modern Pentathlon). The Meath woman achieved a lifetime’s ambition by winning Ireland’s first ever medal in an individual Modern Pentathlon World Cup event when she took silver in Sofia in May. And she came agonisingly close to taking another medal at the World Cup final in Kazakhstan where, in the end, she finished fourth. Come July, she led the Irish team, completed by Eilidh Prise and Sive Brassil, to silver at the European Championships, Coyle finishing fifth in the individual standings.

June: Sarah Healy (Athletics). In what has been a stunning summer for Irish youth athletics, with Rhasidat Adeleke, Sophie O’Sullivan, Sommer Lecky, Molly Scott, Gina Akpe-Moses, Ciara Neville and Patience Jumbo-Gula all among the medals at either the European Under-18 or World Under-20 Championships, Healy has been in exceptional form too, her highlight coming at those under-18 Championships when she won both the 1500m and 3000m titles.