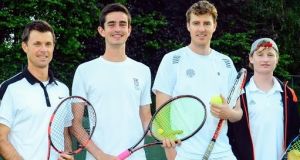 Four former Irish Davis Cup tennis players have set a new world record for the longest ever doubles tennis match. David Mullins and James Cluskey with Daniel O’Neill and Luke McGuire from Trinity Tennis Club, stopped playing after a gruelling 62 hours with the match ending after 149 sets on 77-72.

The marathon, played at Fitzwilliam Lawn Tennis Club in Dublin last July, has since been reviewed and approved by the Guinness Book of Records. A detailed submission as well as the 62 hours of video tape was presented to the judging body before being declared the longest marathon doubles tennis record.

The record event was a major fund raiser for the Enjoy Tennis programme which has to date enabled almost 1,000 players with a disability to learn and play the game in 70 clubs around Ireland. It has raised almost €20,000 for Enjoy Tennis.

“Absolutely delighted for the record to be ratified,” said James Cluskey. “Looking back for me our mental toughness and resilience got us through. We had a plan and for the most part we stuck to that plan. “

Two independent witnesses were present at all times to ensure that the strict rules for a world record attempt set down by the Guinness Book of World Records were adhered to.

The Enjoy Tennis programme includes players with an Intellectual Disability, Autism, Blind/vision impairment, Cerebral Palsy, Acquired Brain Injury and wheelchair users. The funds raised from the World Record attempt have also allowed us to bring Enjoy Tennis to the providers of services to those experiencing mental health issues.