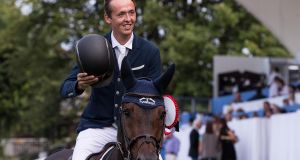 Wexford’s Bertram Allen and Molly Malone recorded Ireland’s best result to date in this year’s Longines FEI World Cup series when fourth in Sunday’s third leg at the five-star show in Verona, Italy where they were winners in 2014.

Fourteen combinations progressed to the jump-off round where, eighth to go, the Germany-based rider briefly took over the lead when clear in a time of 38.60 on the 14-year-old Kannan mare, which is owned by the Allen family’s Ballywalter Farms.

That time was immediately bettered by Switzerland’s Markus Fuchs riding Clooney 51 (38.40) and again by Belgium’s Niels Brynseels who, on board Gancia de Muze, stopped the clock on 37.03. However, from his last-to-jump draw, Germany’s Daniel Deusser had the final say and stormed home in 36.83 with Calisto Blue to snatch the €47,500 first place prize-money.

Joseph Murphy had a most disappointing end to his trip to the four-star event at Pau in southern France when Fernhill Frankie, which had been lying 13th going into Sunday’s concluding show jumping phase, was eliminated for two refusals, while the Co Down rider picked up 20 penalties with Sportsfield Othello for a three-phase total of 94.3.

The 60-runner class provided a great result for the host nation with 23-year-old Thibault Fournier, who was making his four-star debut, winning on Siniani de Lathus (29.5) while his 26-year-old compatriot, Clara Loiseau, finished third with Wont Wait (35.7). They both had a pole down on Sunday as Britain’s Gemma Tattersall jumped clear to complete on her dressage score with Pamero 4 (29.9).

1 ‘For 25 minutes I ran out of oxygen’: Pepe Reina on his coronavirus battle
2 ‘This is sick’ - seventh-tier Swedish club cancels friendly after betting mayhem
3 Sky Sports customers set to save on bills until Premier League returns
4 Gerry Thornley: Changes to tackle laws could transform rugby by time of next World Cup
5 Jack Grealish needs to show that his remorse is real this time
Real news has value SUBSCRIBE

FAI moves to defer portion of salaries as Fifa ponders cash support 20:30
NFL votes to expand postseason following cancelled annual meeting 20:21
‘For 25 minutes I ran out of oxygen’: Pepe Reina on his coronavirus battle 20:06
World Rugby aiming to outline range of options by end of April 19:03
Impact of Covid-19 fails to derail pragmatic Stenson 18:38
Here is your handy guide to sport on television this week