Following a disappointing year, next week’s agm will propose a number of new measures 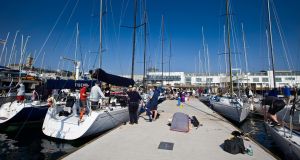 Following a summer of discontent, next week’s conference and agm of the Irish Cruiser Racing Association (ICRA) looks set to draw a line in the sand with a raft of measures aimed at putting the biggest single grouping within sailing back on an even keel.

With approximately 400 boats nationwide catering for an estimated 7,000 crew-members, the ICRA organisation has been coming to terms with internal wrangling and the failure of the 2018 National Championships.

Even with low turn-out from non-west coast boats, the event scheduled for Galway in mid-August was beset by a combination of weather and dock access problems; no competition took place on any of the four advertised racing days.

The incoming leadership team, under Commodore-elect Richard Colwell of Howth Yacht Club, is expected present a series of measures aimed at restoring confidence in the 16-year old organisation.

Apart from a new constitution, of most significance to racing sailors will be class and event rules that the ICRA hopes will be approved for use in the 2019 season.

Final touches are being made to the draft presentation that will be made at Lough Derg YC on Saturday, November 3rd at 11am.

The proposed regatta organisation regulations will, for the first time, establish clear minimum standards for host organisers to deliver.

As the annual ICRA national championships changes venue each year, switching mainly between Dublin and Cork venues, there has often been significant variance in event standards from facilities to race management afloat.

Regular feedback from an annual survey has picked out many issues though the underlying point, unspoken by many boat-owners, is that the cost of travelling to away venues can often amount to thousands of euros even before crew accommodation is taken into consideration.

A substandard event can blight a venue’s reputation for years, regardless of the causes. Unfairly, some venues are occasionally blamed for poor weather conditions.

Amongst the proposals for new regulations, an experienced ICRA “technical delegate” would be appointed to work with event organising authorities to help deliver consistent national championship standards.

In keeping with modern trends, the championships must comply with the “Clean Regattas” environmental programme, especially with the provision of drinking water and avoidance of single-use plastics.

As far as regulating for weather is concerned, the standards set out wind ranges that various classes of boat-sizes should be able to race in with maximum for the biggest boats set at Beaufort Force Seven but also minimum of six knots.

This range would be from the testing end of the scale at the limit of safety down to the questionable fairness of flukey conditions that more often beset events in the summer.

However, it was strong wind forecasts on at least one day of the Galway championships this year, combined with lack of a suitable port of refuge when the Galway dockgates were closed, that forced the cancellation of the 2018 series.

Under the proposed standards, Galway would be unlikely to qualify unless its facilities were upgraded to provide sheltered berthing outside the closed dockgates.

The proposed standards even go so far as to specify what arrangements should be in place for post-racing social facilities to cater for more than 1,000 participants likely at a well-attended championships.

The ICRA move towards event standards matches international practices by major one-design associations although similar moves for the whole sport by the then Irish Sailing Association more than a decade ago were dropped.

Next year will see the ICRA nationals return to Dublin Bay where the Royal St. George YC will host the event at the beginning of June.

However, the early fixture has already drawn criticism for returning to the days of front-loading the season with major events and the 2019 programme is likely to see four important events crammed into a five-week window.

However, ICRA maintains that boat-owners should be able to get crew for events that are staged to minimise the impact on annual leave requirements. Owners have also expressed clear preferences against holding the nationals later in the season, preferring instead to have family holiday, cruising and local club events in the late-summer/autumn season.