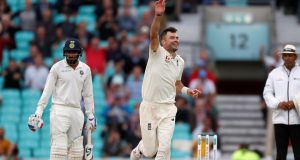 Actually Tuesday was not a bad day to be there either. On Monday there were records galore and the fondest of farewells. But now there was an unexpected turn when most had assumed that there would merely be a routine finale to a diverting season: instead there was a brief intrusion of the glorious uncertainty, which can be even better. For a moment or two there was a flicker of a chance that India might win this match.

That never came to pass and it may have been a fanciful thought. In the end England’s victory was comfortable; they won by 118 runs, to take the series 4-1, when there were still almost 14 overs remaining.

However the fairytale nature of this contest eventually resurfaced.

With nine wickets down Jimmy Anderson had the second new ball in his hand and Mohammed Shami on strike, not a bad combination when pursuing another record-breaking moment. Anderson needed that scalp to take him to 564 Test wickets and to go past the great Glenn McGrath. It was not long before Shami’s middle stump went missing and it was all over – the match, Alastair Cook’s career and the on-field union between him and Anderson.

Within minutes Anderson was in front of a microphone and the emotion of one of the most emotional Tests of recent times endearingly took over. The great fast bowler, a bit of white line fever man just like McGrath, often snarling inside it yet charming when on the outside, choked up. “He [COOK]has been my mate. He’s just been there all the time,” he said. And they left it at that. They had to since no more words would come out.

Yet another captivating day of Test cricket was not just about Anderson and the pursuit of another record. It owed much to two dashing Indian batsmen, who could decorate the next decade, KL Rahul and Rishabh Pant, who both hit free-flowing centuries that kept the game alive.

On Monday night just after tea India were two for three. Twenty-four hours later they were 325 for five and the Guardian’s abacus showed that with 27 overs remaining India required 139 more runs to win, an outcome which would trump all of Monday’s records since no Test team has ever chased as many as 464. Rahul, unbeaten on 46 overnight, had advanced to 149 not out, Pant was 113 not out, his maiden Test hundred and the first by an India wicketkeeper in England. Together they had added a blissful 204, brimful of silky strokes.

Initially their partnership was viewed as spirited, face-saving resistance prior to England mopping up the match and the international summer. But by mid-afternoon, around about the time that Joe Root felt compelled to recall Anderson and Stuart Broad in tandem, even though the latter is currently hampered by a cracked rib, it dawned that India were on course for something spectacular.

Rahul had purred along while the pyrotechnics belonged to Pant, who in this series has batted like Brian Lara one moment and Brian Blessed the next. He was Lara-likeon Tuesday; his first six, against Moeen Ali, which took him into double figures, was ungainly as he completed the shot with only one hand on the bat but the next three, all against Adil Rashid, were crisply struck with no apparent effort and they flew a long way. In between there were 15 beautifully timed boundaries.

So Pant with elegant assistance from Rahul had tormented Rashid, who at the tea interval had been permitted just seven overs, which had cost 42 runs. After the break Root opted to continue with Rashid and at the start of the 82nd over of the innings that decision was rewarded spectacularly. Rashid was bowling from around the wicket into the rough a long way outside of the right-hander’s leg-stump. On 149 Rahul fancied a single so he loitered on the back foot; the ball, pitching at least two feet from the stumps turned sharply past Rahul’s slender body and his bat to clip the off-stump. A wonderWarne delivery for the 21st century.

In Rashid’s next over Pant finally ran out of puff. He tried one more big hit but the contact was poor and Moeen circled at long-off to take the catch. In those two overs Rashid had demonstrated his raison d’etre, while Root had hinted that he trusts him a bit more than some of his fellow Yorkshiremen.

Pant’s departure immediately put paid to any thoughts of an Indian victory, which had been deemed out of the question when play commenced. Despite a solid first hour of batting India lost Ajinkya Rahane when toe-ending a sweep shot against Moeen; soon after Hanuma Vihari became the only batsman to be bothered by the bouncers of Ben Stokes and he was caught behind. Timetables were consulted. Instead there was a treat: defiant strokeplay of high quality, a glimmer of uncertainty about the outcome, some timely wrist spin and some more records for the old brigade to savour in their dotage.

It had been a remarkable conclusion to a remarkable series. Somehow England contrived to win it by four matches to one without any runs from the top order. That is not supposed to happen; it is like winning the Premier League with a leaky defence. There are countless improvements needed but the leaders of the group, Root and Trevor Bayliss, deserve some credit since they are the magnets for most of the flak when it all goes wrong.