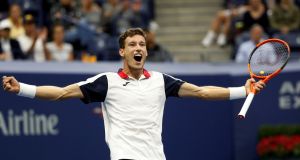 Denis Shapovalov vowed to return to New York and “do some damage” after his US Open adventure ended in a fourth-round defeat by Pablo Carreno Busta.

The 18-year-old Canadian has been hailed as the future of tennis and compared to a young John McEnroe — including by the man himself — during his run at Flushing Meadows.

It is hard to see Shapovalov as anything other than a future grand slam champion given his armoury of exciting weapons and competitor’s mentality.

The impact Shapovalov has made was demonstrated by the fact this was his third match in a row in Arthur Ashe Stadium, a privilege usually reserved for slam champions rather than teenage qualifiers.

Before leaving the court, Shapovalov put down his bags and thanked the crowd and, asked afterwards for his favourite memory of the tournament, he said: “Honestly, I think it was the roar of the crowd when I put my bags down and I went to applaud them.

“They were all screaming. It was so loud, and it was a great moment for me. It really has a special place in my heart now, New York. Hopefully I can come back here for many more years and just try to do some damage.”

At a time when men’s tennis is having to contemplate life after Roger Federer and Rafael Nadal, the emergence of Shapovalov could not be more opportune.

The teenager hopes his success will encourage Canadian youngsters to pick up “a racket instead of a hockey stick”, and he is already aware of the wider impact he has made.

Shapovalov said: “Just a couple of days ago in Central Park, I was walking with my team and I ran into this kid.

“He comes up to me, and he tries to talk to me but he can’t really start a conversation, he’s shaking so much. He’s, just, like, ‘Oh, my God, wow, I can’t believe this’.

“I grew up wanting to play tennis. I want to try to change the sport, first of all in Canada. But definitely in America, I think I’m making an impact, and hopefully I can continue to do so, because for me the best thing in life is to see kids like this looking up to you and just aspiring to be like you.”

The disappointment for Shapovalov was that he could not go further here, with the draw an open invitation for someone to seize the chance to reach a first grand slam final.

That could yet be Carreno Busta, who does not have Shapovalov’s weapons but played an extremely solid match and handled the big points very well.

Shapovalov served for the opening set, had three set points and was also a break up in the third.

He said: “I think I had a lot of chances. I don’t think I played as well today as I have been these past two weeks.

“I think Pablo played a great match. He stayed very tough mentally in the big points. He just played three tie-breaks that were better than mine.

“I definitely had my chances. I’m very disappointed that I wasn’t able to keep my leads. But it’s tennis. I still have a lot of things to learn.”

Carreno Busta admitted he had not heard of Shapovalov until last month, when he defeated Rafael Nadal on his way to the semi-finals of the Masters tournament in Montreal.

The Spaniard said: “In Montreal I watched him playing against Rafa, and he played an unbelievable match.

“He’s playing with a lot of confidence and he’s very young so in the future, he will be one of the best.”

Carreno Busta will next face Argentina’s Diego Schwartzman, who followed up his victory over Marin Cilic by defeating 16th seed Lucas Pouille 7-6 (7-3) 7-5 2-6 6-2.

At 5ft 7in, Schwartzman is the smallest man to reach the quarter-finals in singles at a grand slam since Jaime Yzaga here in 1994.

Schwartzman looked to be in trouble in the third set when he began to feel pain in his right leg but he fought through it impressively.

The 25-year-old said: “I am really surprised because I was just thinking about the leg in the fourth set. Maybe Lucas, as well. That’s why he can’t deal well with it in the fourth.”

South African Kevin Anderson is through to the quarter-finals for the second time in three years after beating Paolo Lorenzi 6-4 6-3 6-7 (4-7) 6-4.

Anderson surrendered his record of not having lost a set or a service game this tournament but remains a strong contender in the very open bottom half.

Anderson will now take on American Sam Querrey, the only player in the bottom half of the draw to have reached a grand slam semi-final before.

The 17th seed will take some stopping if he continues to play as he did against Mischa Zverev on Sunday night.