Chance has proven a fine thing for cyclist Lydia Boylan 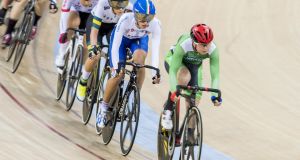 Lydia Boylan couldn’t but smile when she was reading ‘Bounce: The Myth of Talent and the Power of Practice’ by Matthew Syed, in which he argues that it’s more a colliding of chance events, combined with endless hours of practice, that puts someone on the path to sporting success - rather than them possessing a special gift.

And chance has played a major part in her sporting story. If her car hadn’t broken down and if the bottom hadn’t fallen out of the economy she would now, more than likely, be working for an engineering firm in Dublin and doing a bit of sailing in her spare time.

Instead, she’s a professional cyclist, the Irish Road Race Champion, the first Irish rider to win a UCI (International Cycling Union) race, and next week she goes in to the Rás na mBan as the chief hope of a home success. And there are the big targets on the horizon: the 2018 Commonwealth Games and the 2020 Olympics. Chance, then, has sent her in dizzying directions.

A native of Ringsend in Dublin, the 30-year-old graduated from UCD with a degree in civil engineering in 2008. “The height of the downturn,” she says. “I’d got a really good job with BuroHappold. I was set, best company to be with. I worked on the Aviva Stadium, some great projects. The job lasted three months before I was made redundant.”

With the construction industry on its knees and with little prospect of work she headed to the Imperial College in London to do a Masters in Earthquake Engineering. “Ah, it looks good on the CV,” she laughs. “I just wanted to study something I hadn’t done before, and lots of it that can be applied elsewhere.”

By then, after her car had given up the ghost in Dublin, she had taken to her bike to get around. She can’t quite explain it, but she just took to it. She joined the Scott-Orwell Wheelers club in Dublin and by the time she moved to London the bug had bitten. “I got in to the track scene there, at Herne Hill, there was a really good gang, they became my social group.”

A cycle of distraction

After her Masters she got a job with a London company. “But my work wasn’t as good as it should have been, I was getting more and more distracted by cycling, all I was thinking about was training. It was getting to a point where I was winning all the local races in London, so I wanted to have something more to aim for.”

“I’d done well at the Irish road and track nationals, then the chance of competing at the 2014 Commonwealth Games came along. My mother is from Derry so I was eligible to represent Northern Ireland. Everything started coming together. I decided to stop working and focus on the bike. I wanted to make something of it.”

And three years ago Boylan was signed up by British professional team WNT who compete internationally. “Incredible set-up, everything is so professional. And we ended up with Katie Archibald [the British Olympic champion] on the team, she’s world class.” And now she’s competing at the level she dreamt of, taking on the world’s best.

“I’m massively lucky that I can now live on what I earn from it and the support I get from Sport Ireland. I can make ends meet. But women don’t go in to cycling for the money, unless you’re a gold-medal winner there’s little prospect of earning a lot.”

But she’s not one to complain about the gap between the rewards in men’s and women’s cycling. “When people argue there should be equal prize money, I’m like, ‘why?’ Men’s racing is bigger, it has more of a history, it has more sponsors, more people watch it, why wouldn’t the prize money be more? I don’t want things to be equal for the sake of them being equal, I want our sport to push itself to a point where we’re equal because we ARE equal. I want to earn it.”

“It’s like when they say there should be equal distances. Physiologically we are different. We can’t sprint for a kilometre, men can. It feels like people fixate on ‘equality’ when at times it makes no sense. If you start giving me tours for women that are 250k long each day I’ll be like ‘see ya later’. I’m not built for that. We’re just different to men. That doesn’t mean weaker or inferior. Just different.

“So, I’m not a staunch feminist, I’m more of an ‘equalist’. Everyone should have a certain level of respect, then you earn whatever comes after that. I don’t want things just because I’m a woman, I don’t like pulling that card. I want respect because I train hard and I race hard.”

Which is why, she says, she was so infuriated by events at the National Road Race Championships in June, when the women were told to pull over to let the men’s race through. “There’s a basic level of respect that we do deserve, and we didn’t get that at the Nationals. I was shocked to come back to that. It felt like we were second class.”

“It was the organisers’ attitude after that really rubbed me up the wrong way. ‘The women were too slow’! It was the Nationals! It’s always more cagey! It’s always less aggressive! It was as if they didn’t even understand the sport. They’d claim they are staunch supporters of women’s cycling - I was like, ‘if you are, you wouldn’t be talking like that’.”

But cycling is no stranger to negative headlines, the issue of doping long since blighting its reputation. “It creeps in occasionally, like the whole Lizzie Armitstead debacle pre-Rio when she missed tests, but generally it’s less of an issue for us - and that’s because we don’t have the money. If you compare wages on a women’s team to, say, Team Sky, it’s pennies.”

“On a human level the temptation is massively understandable if you’re giving your whole life over to the sport and someone dangles this magic thing that means you will win more. I guess the difference for me is that I’ll never think of it as my livelihood - if I want to make money I’ll go back to engineering. For me it’ll never be that important to win.

“What I always bring it back to: sport is entertainment. It makes money because people want to watch it. I’ll bring it up . . . the McGregor fight. Entertainment. That wasn’t about boxing, that was about making money. And that’s what sport has become. Look at the Olympics. Massively commercial. Is it really about the best human any more? I’m a cynic in that sense. And I’m not helping the world by cycling. What I do is incredibly selfish. At least with engineering I felt I was giving back to the world, creating hospitals, bridges, all that. You feel like you’re adding to society. Me riding around the Wicklow mountains for four hours every day is not adding to society, in any way shape or form.

“But I do it because it’s enjoyable, it’s fun, and I get to test my limits, see how far I can push myself. It will never be about the pay cheque. I’ll probably go back to engineering when it’s over, I don’t know when that will be, but for now I’m loving it.”

The chance of a lifetime. And she’s taking it.